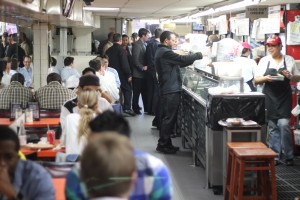 I don’t really know if there’s any Floridian cuisine because I haven’t taken too many holidays in florida (other than Orlando), but I do know Cubans. The best Cubans are supposed to come from Miami, a place that I’ve never been. I decided to explore one of the best Cubans in NYC on Cinco De Mayo. I know I’m mixing cultures here, but they didn’t seem to care over at Margon; they were capitalizing on it with $5 for two lunchtime Coronas.

They all knew what I was doing when I took out the T2i. Everyone was happy to smile and pose for me, but the smiles didn’t stop when the camera was off. These guys were having fun. 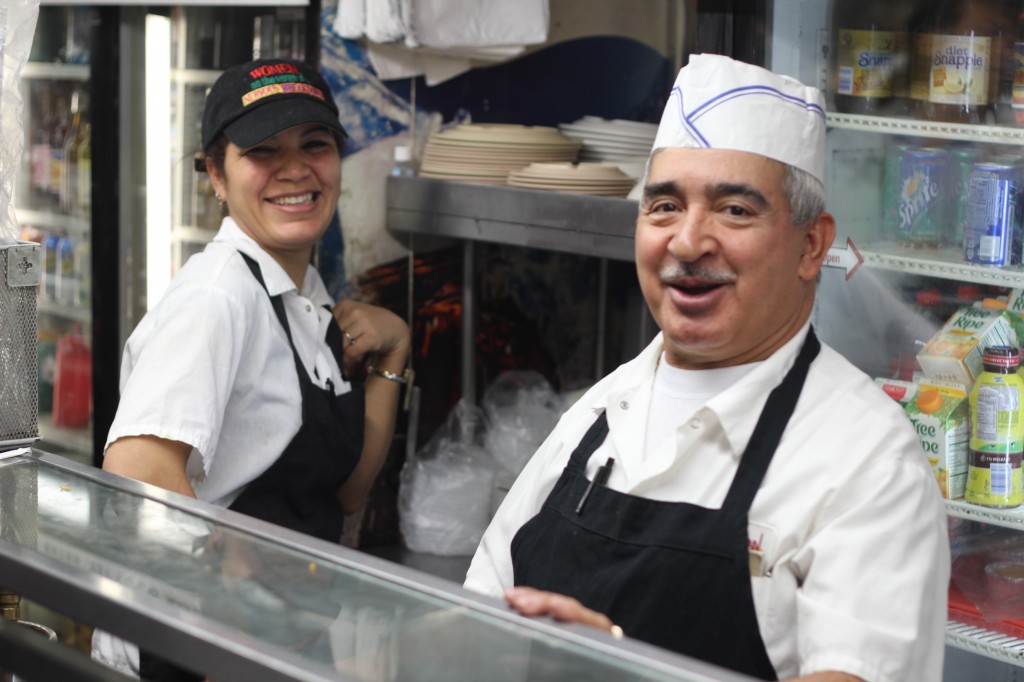 They have an entire station dedicated to Cuban sandwiches only. This is the Cuban guy: 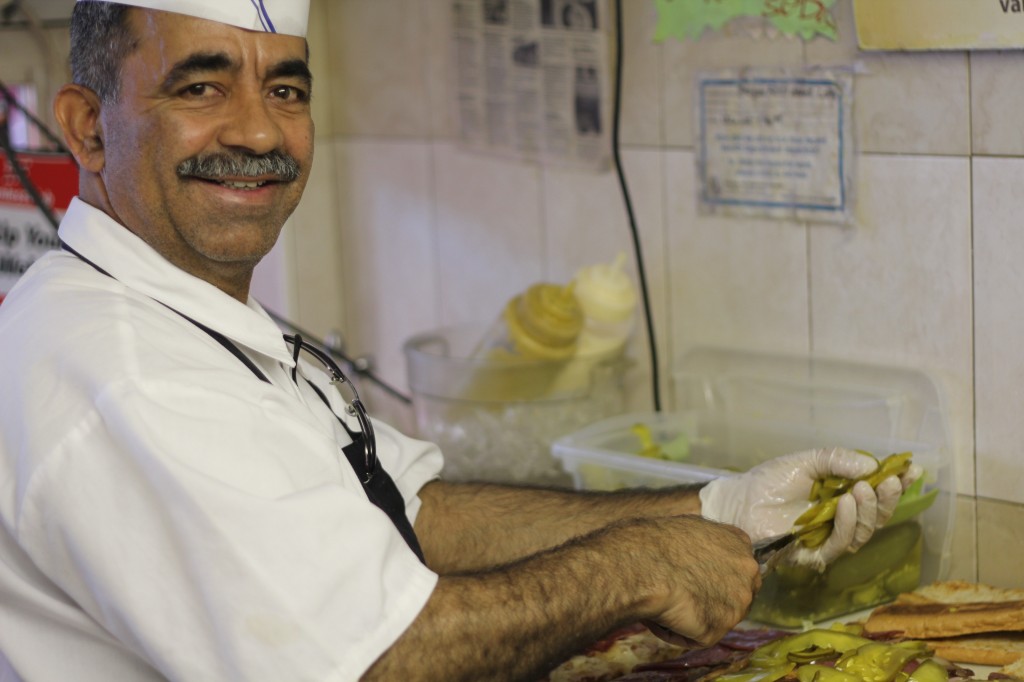 And these are the masterful Cubans: 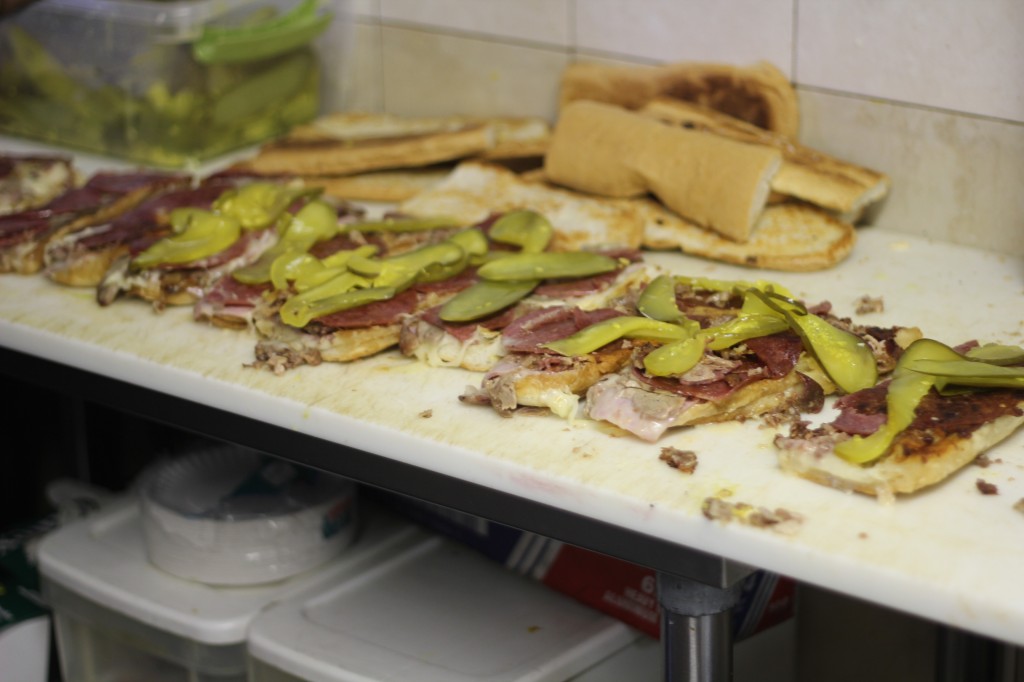 They use three types of pork instead of two (which is awesome). Anytime you can put another iteration of pork on something, do it. It’s probably going to taste better. I should have asked for mine with bacon… next time. It was definitely one of the best Cubans I’ve had in the city. I just had another Cuban this week at CafÃ© Habana, and this was certainly on par. I think these two restaurants are always battling it out each year for Cuban supremacy.

This is what it looked like when it was on the plate: 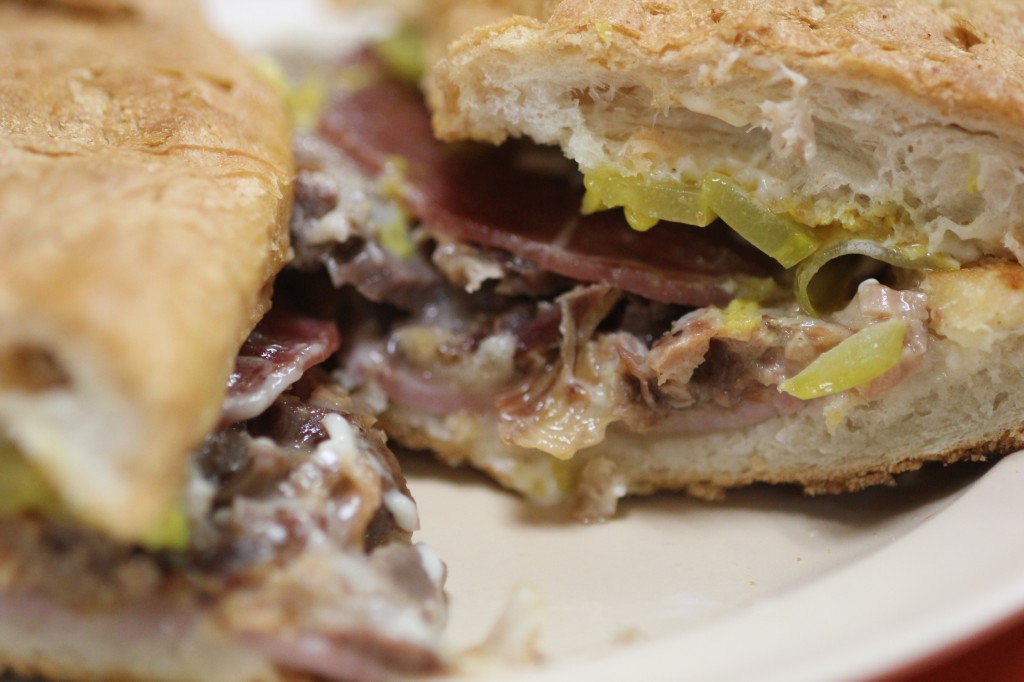 RenÃ©e got a Chicken Cuban. I’m doing a bunch of personal branding stuff right now because I just made this cool infographic rÃ©sumÃ©, and she was interested in talking about a few business opportunities with me. She’s a total go-getter – I like to be associated with these kinds of people.

She ate some of the Chicken Cuban (we had a pretty big lunch) and I bagged the rest up and had it for breakfast the next morning. I would not typically order a Chicken Cuban, but this one wasn’t bad. It had everything the Cuban had except pork, and you know my feelings about pork. I think that trichinosis would have to be a certainty as a prerequisite for me ever ordering a Chicken Cuban. 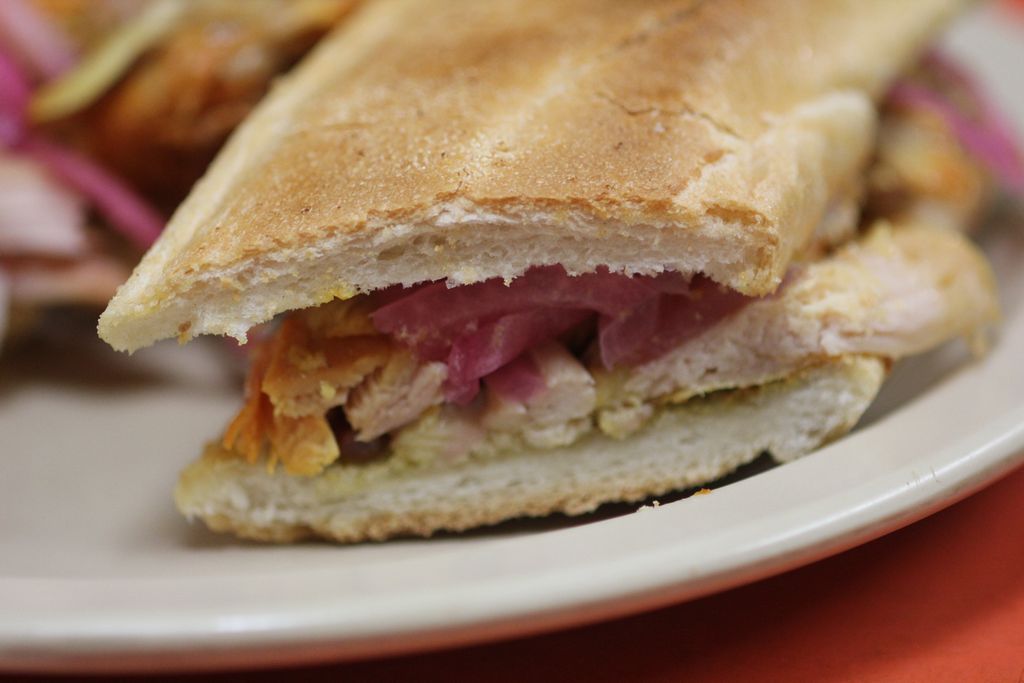 They threw us these as a little sampler platter for free. The chicken was a bit overdone, but tasty and not too salty. I don’t know why I say “not too salty” other than to indicate that I’ve had a lot roasted chicken where its downfall was “too salty.” The pickled onions balanced the oils in the chicken well. The plantains weren’t hot inside, so I take points off. I want my fried plantains to come right out of the fryer and land on my 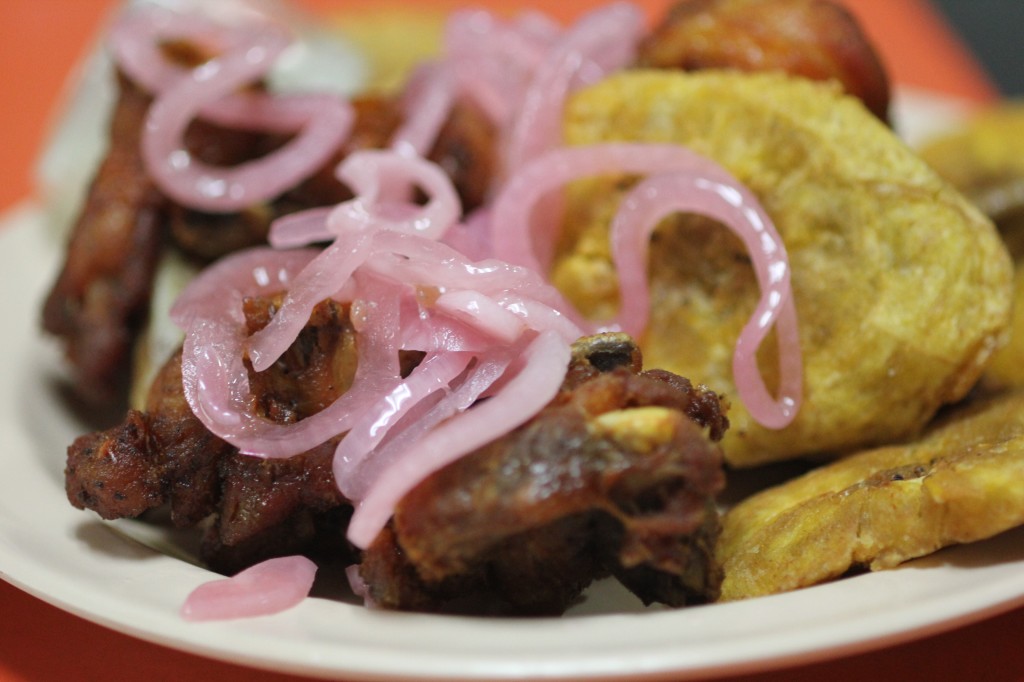 I’m usually more of a plantain chip fan, but for some reason, I liked the ones below better. They ‘re still fried, but what would you call them, exactly? Fried Sweet Plantains? They also gave us some black beans that I mixed with the orange rice (and what the heck is the orange rice called?) and that was probably my favorite thing that I had all day. I need to learn how to make legit black beans. I made them once with a Hatian guy who was dating a sister of an ex – they were certainly the best I’d ever had. 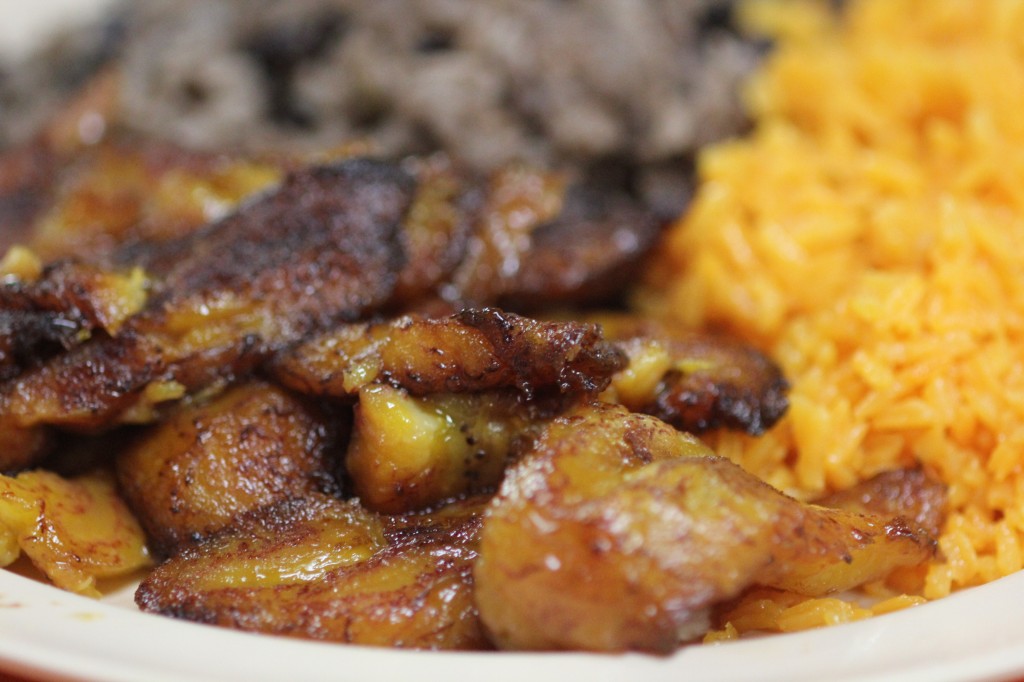 Then there was some cevichÃ©. RenÃ©e had the Pulpo: 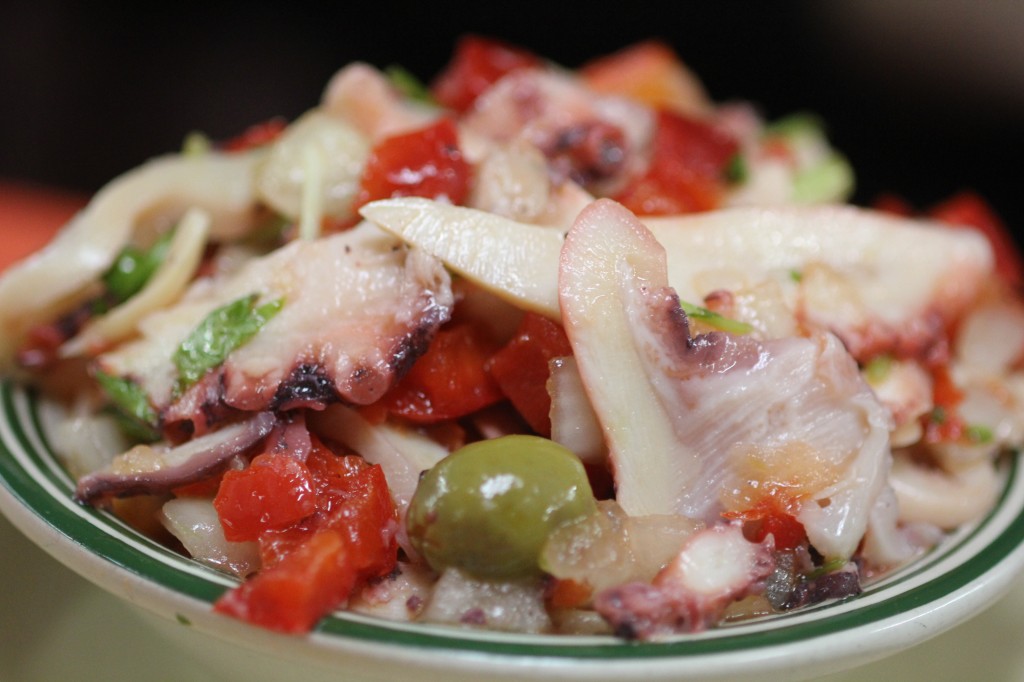 I had the Shrimp: 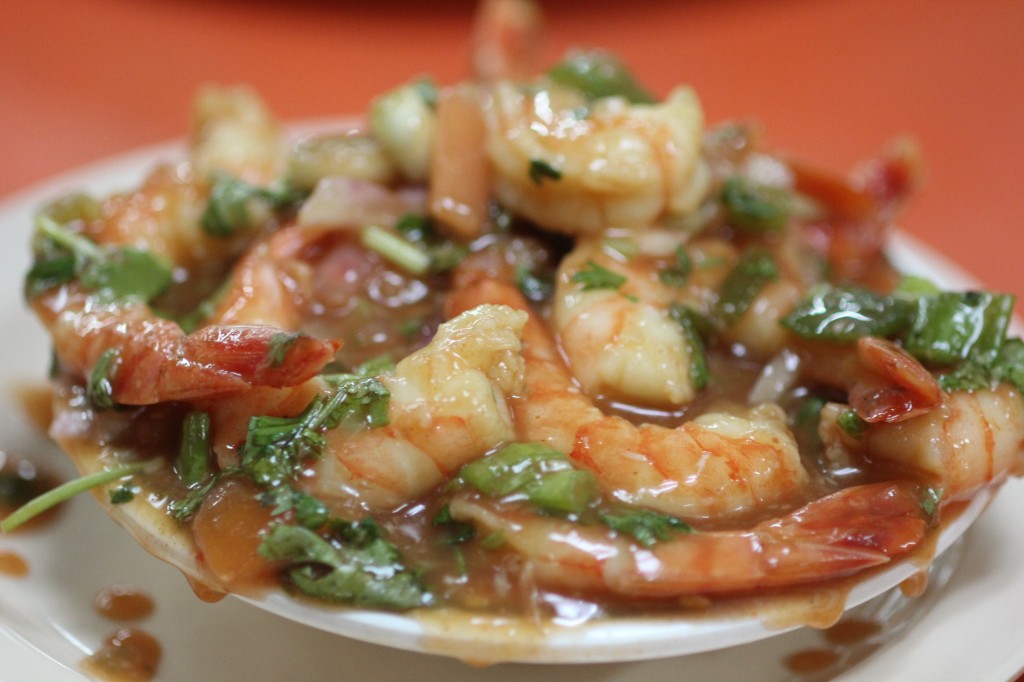 I finished mine and had a few bites of RenÃ©e’s. I am more of a grilled octopus fan, anyway (the Greeks really nail that dish).

When I was in Central America, I went on a Cigarettes and CevichÃ© diet for a week. I lost five pounds in three days before I left that town and couldn’t get the ceviche anymore. I did Cigarettes and Guacamole after that and lost another five pounds in a week or so. The end of that week on Friday night, I smoked a pack and a half and woke up at 3AM coughing up blood. I quit cold turkey. I still have the occasional fag when I’m drinking, but I went four months without having one that time.

It’s funny that I know Central American cuisine better than Floridian cuisine. I’ve been to Florida four times, and each time I’ve been there, they’ve been Orlando trips They’re practically synonymous with Disney World, but I’ve only been there once. Usually I don’t do this, but yesterday, I clicked “Yes” when Hulu asked me if this Walt Disney World ad was relevant.

I think we all need a little Disney every once in a while, even if the Cubans are better in Miami.