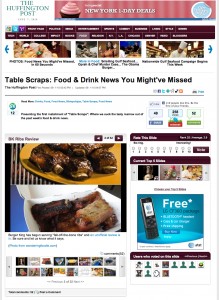 I cooked for Michelin Chefs and Eater loved my food the best (Sarah Simmons prepped it and I cooked the Shrimp and Grits). Just an Online Minute highlights my true Wandering Foodiness

I won a bunch of appliances from Sears, they flew me and a friend out to Chicago, and I judged the Sears Chef Challenge!

Kelly of Just an Online Minute doesn’t love me, she just loves my Prairie-Doggie style (at least we think, we think it’s a prairie dog)

Not really press, but this was a press event where I hung out with Stew Leonard Jr. for a bit. His daughter’s wine is legit.

National Public Radio knows that the two-second time delay is essential for sexy low-light still-life capture with a point and shoot. Here’s the audio

It’s Meyer vs. Meyer in the final of Restaurant Madness NYC on Eater

Eater NYC comes down with a case of the MaDnEsS!

The MaDnEsS is spreading! NBC New York contracts the virus

Zach from Midtown Lunch food tours with The Foodie 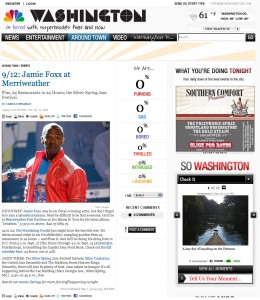 The Wall Street Journal, Mashable, the Christian Science Monitor, and El PaÃ­s pick up the first Ebay auction for Google Wave (Hey, I’ll take it any way I can get it!)

Trying to crack down on my time at The DCist

Bucking the slimming trend at The Washington Business Journal

Stayin’ Alive on WUSA 9 in DC