Warning: "continue" targeting switch is equivalent to "break". Did you mean to use "continue 2"? in /home/blounp/wanderingfoodie.com/wp-content/plugins/jetpack/_inc/lib/class.media-summary.php on line 87
 Pre-Gaming for 93 Plates at Ma PÃªche
≡ Menu

Pre-Gaming for 93 Plates at Ma PÃªche

The Verdict: Bahn Mi – so-so, Rice Noodles – Frickin’ Wonderous, Chicken Soup – Zach (cold) Me (one bite was better than the other), Brussel Sprouts – needed more brussel sprouty taste, Sweet and Sour Pork – I ate most of them, Chocolate Chip Cookies and Milk – highlight of the meal 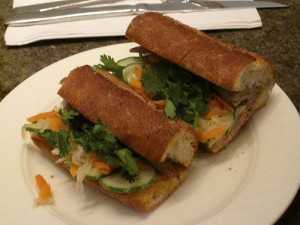 If I was prepared to pay $10 to be full after lunch and all I had was the Three Terrine Bahn Mi, I would be peeking into the kitchen to see if Jared was back there controlling my portions. It is TINY (see the irony of the caps – oh for shame!). I’ve paid more for less before, and I already knew what I was getting after reading Zach Brooks’ article in Midtown Lunch. It should also be noted that this was my first Bahn Mi experience, and as such, I had high hopes seeing as “Bahn Mi” seemed second only to “bacon” in foodie search traffic of 2009. The bread was crisp, I would have liked 1 out of 3 of the terrines to be more firm, but I could taste the quality of the vegetables and immediately knew where my $10 went. They set it off. My companions let me know that better bahn mi sandwiches were found elsewhere in the city, but until I try them, the benchmark is set by Ma PÃªche.

I only had a few bites of the chicken soup and the rice noodles. I don’t feel qualified to make a judgment on these, but I did have the rest of my ex’s rice noodles after she’d eaten all the noodles (which, I am certain, were the best part). Her leftover pork was quite tasty, but the noodles were what made the dish. 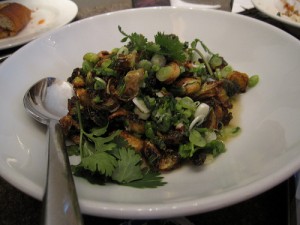 When the waitress said “I don’t really like brussel sprouts but I liked these,” I didn’t know it was because you couldn’t taste the brussel sprouts. Look at the picture: you can’t even tell the dish includes brussel sprouts. Here’s the thing; It tasted great, but it just didn’t taste as I’d expected it to. Now it wasn’t to this extreme, but I think you’ll get what I mean when I say that I probably wouldn’t enjoy a spoonful of ham-flavored pudding (molecular gastronomy can only take you so far). It was a tad heavy on the cilantro, I really had to concentrate to taste the brussel sprouts, and the others weren’t keen on the fish sauce it was sauteed in (which I liked). This was our least favorite item.

The sweet and sour pork had some lemongrass that balanced the flavor nicely. The pork crackled as I bit into it. I was thoroughly surprised by the way I was able to eat the bone along with the rest of the pork and would love to know how they did that because I want to buy that machine. 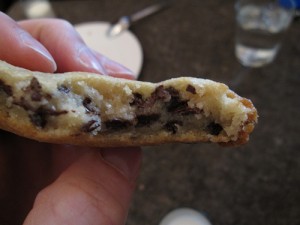 I’m not usually a big sweets person, but I forever put aside that preference dining with Mr. Chang when I tried his Crack Pie. It made me a Momofuku convert. Knowing this, we were getting dessert, and for dessert, they played the old if-you-want-it-for-dessert-you-need-to-order-it-now card on us. We fell for it, and hard. The fresh-from-the-oven chocolate chip cookies with milk ruled the day. Soft and chewy and warm and sweet and orgasmic (to quote Mr. Cohen) with a buttery, crisp bottom that sank with the weight of the medium-rare cookie dough a bit in the middle as I picked up the cookie to photograph it. Tasting the cookie felt like I was getting a gold star for listening when the teacher came by and let us know what we should remember to order.

As I was leaving, I had to ask the concierge where the bathroom was. With all the construction going on, there is no room for a bathroom on the first floor, so I took an elevator to the WC. The first elevator took so long to come, I looked for an alternate way out. I hopped into a second elevator that let me out on the floor I thought I wanted to be on, but when I turned the corner in the small hallway, I was in the kitchen. Tien Ho was there to steer me in the right direction toward the exit. I didn’t know what the guy looked like until I googled him, but now I’m sure it was him. I think he asked me more questions than necessary about how I got into the kitchen, and I’m sure I won’t be the last one to wander in as the construction finishes up.

To wrap it up: Yes, the portions are small, but the taste and quality are top notch. You must save room for dessert, and if you play dumb, you might get a personal tour of the kitchen from the head chef.