Warning: "continue" targeting switch is equivalent to "break". Did you mean to use "continue 2"? in /home/blounp/wanderingfoodie.com/wp-content/plugins/jetpack/_inc/lib/class.media-summary.php on line 87
 Lima, Peru – Part Two
≡ Menu 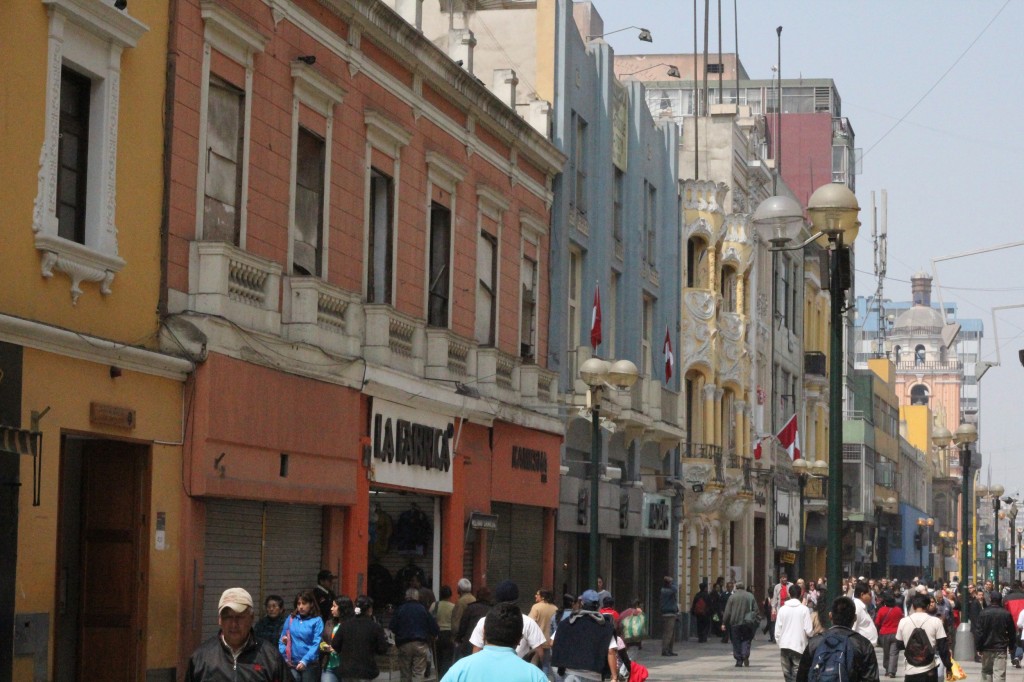 This update spans two separate stints in Lima – one pre-Machu with the family and one post-Machu with food poisoning. I even have the picture of the place that gave me the food poisoning. It was fried chicken livers and a salad, but it couldn’t have been the chicken livers. You know they always tell you to make sure your food is cooked down here… that is a rule I have not abided by thus far. Even after the issues, I just like salad too much to stop eating it.

To the right is somewhere in downtown Lima. We had a half day tour of Lima that brought us through some expensive parts of the city, drove by some unimpressive ruins (the size of a few football fields right in the middle of a residential area), the Plaza de Armas, and two churches. All of the squares down here are a lot prettier at night – they really highlight the architecture with lighting well. Do I have a picture of that in this blog post? Â Uhh, no.

These guys are ready for la revolucion. My tour guide told me I shouls ask to take their picture, and I am guessing they get this request a lot. They were all over the Plaza De Armas – the capital area of Lima. Dissimilar to the equipment carried around by Americans in D.C. only by technological function. 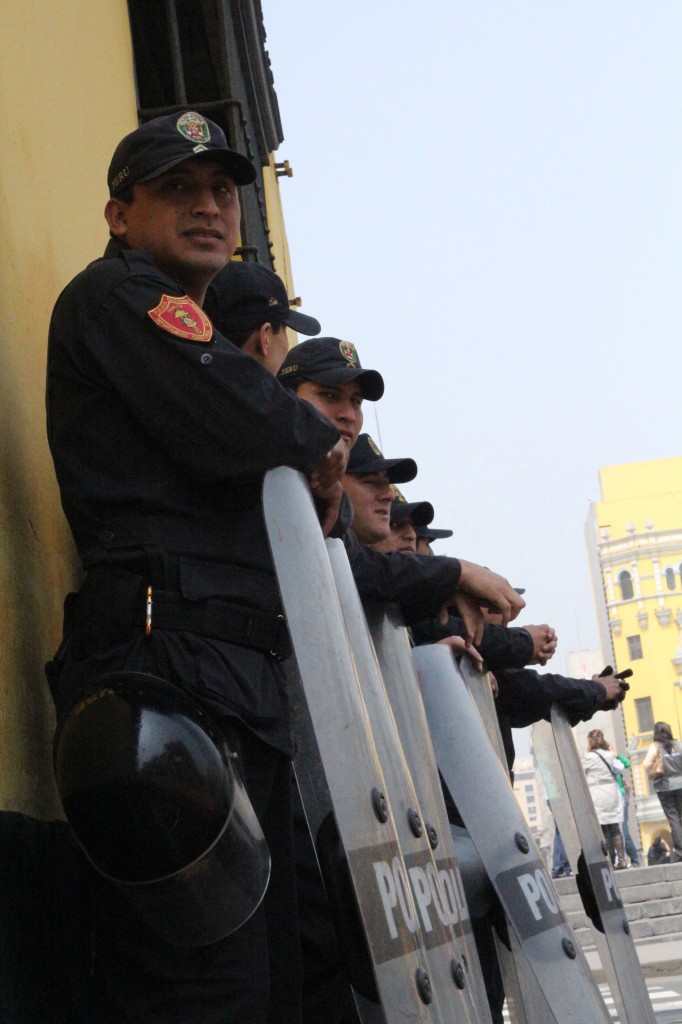 I used to have a dream that I could get a unimog camper and go off road and make some kind of web series about it. Â If I could get my hands on one of these cheap, I think retrofitting it would be half the fun. 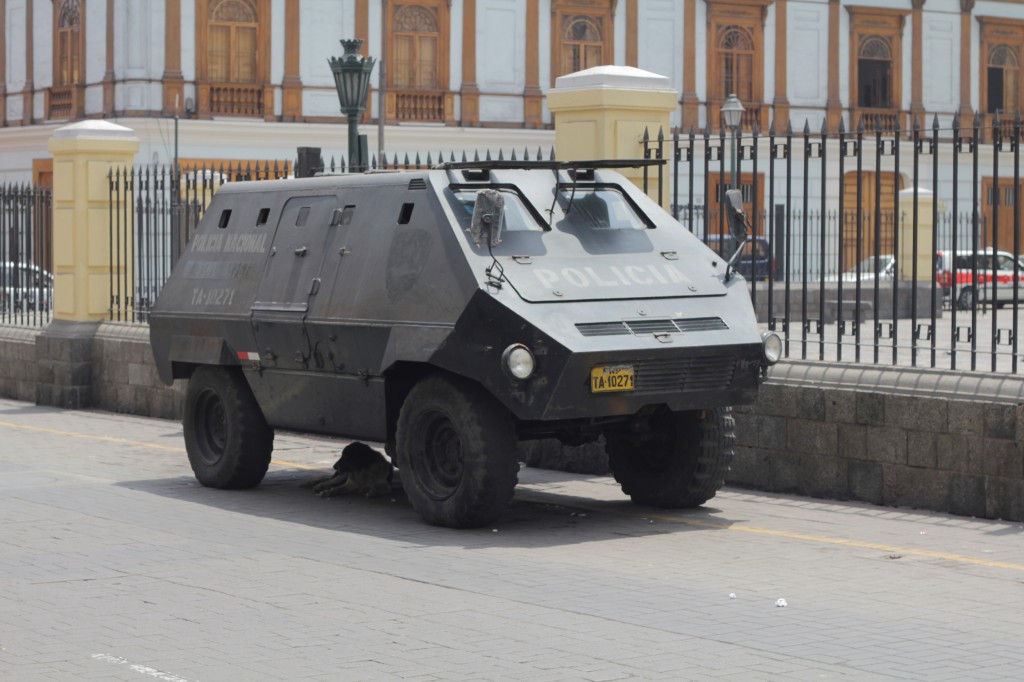 The updraft coming off the Pacific up the cliffs in Miraflores makes it so these Â guys can fly all day if they want. 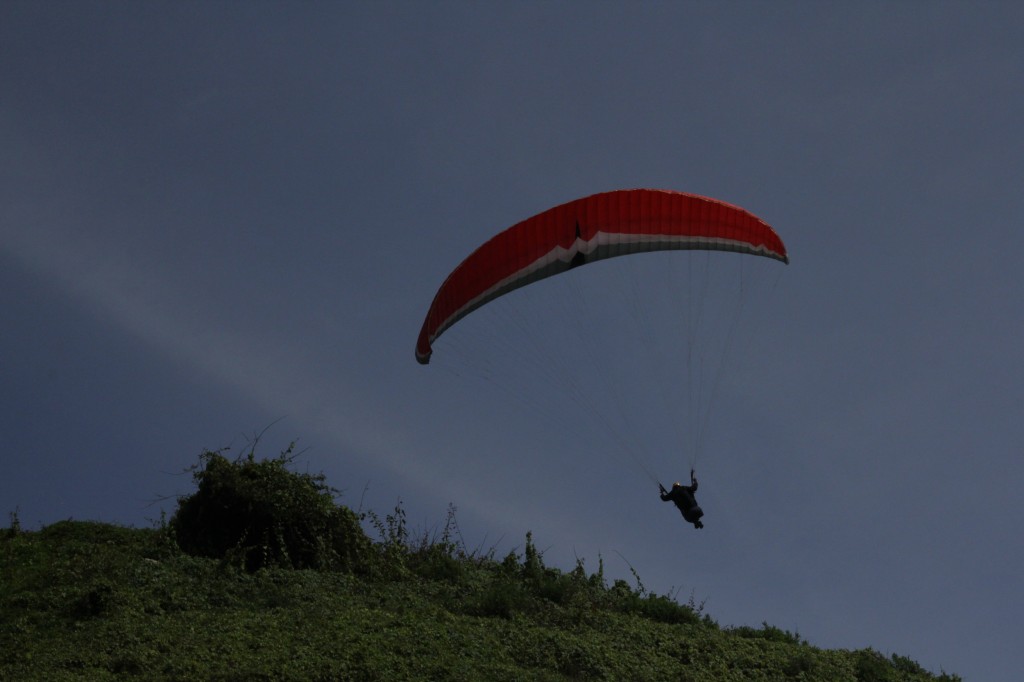 Then we took a nap at the hotel and got some food (the food post is coming up) and then we went out and sang some Karaoke. Â I think my dad did My Way.

My brother did Careless Whispers, I was going to do Faith, but was waffling a little bit on it, and when my brother took this classic, I had to do something different. Â I completely forget what I sang, but I didn’t have the range for it. Â  Tim is awesome at karaoke – he completely rocked it. 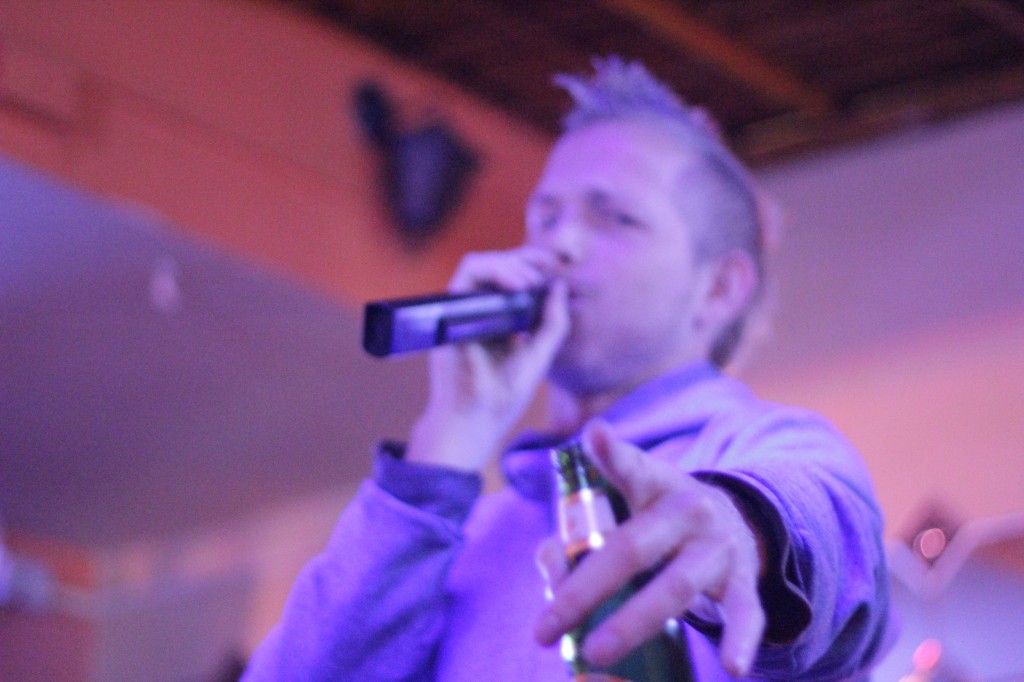 I didn’t do so well on the song, but I think I won them over with the dancing. 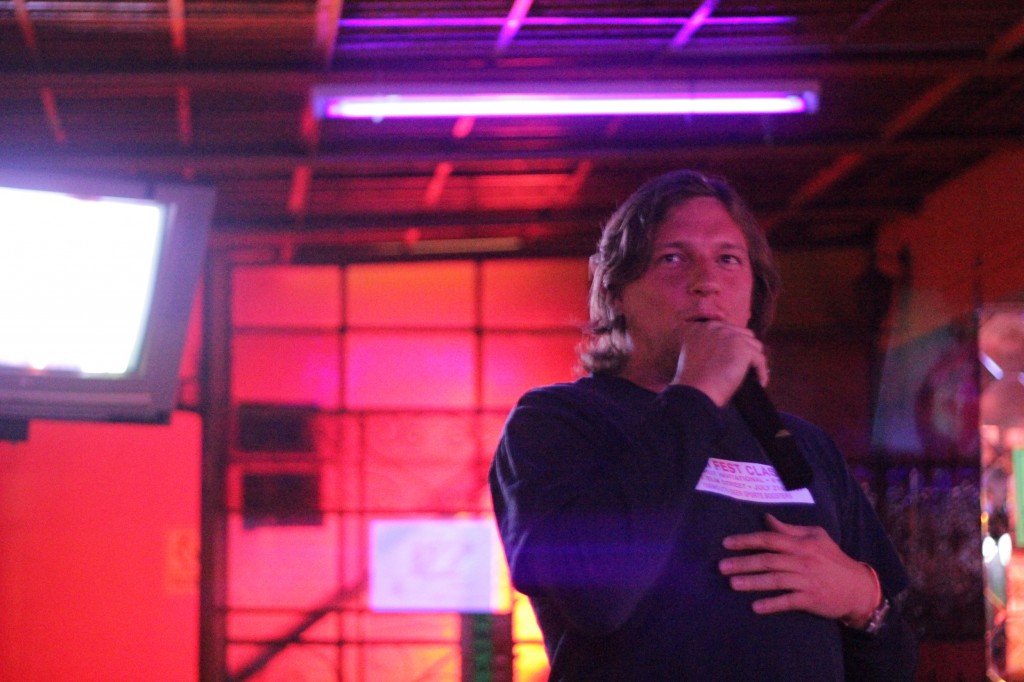 And then here we are a week later, getting food poisoning. Â The girls were really surprised to see me eat the chicken livers. Â I doubt many gringos come here – about five blocks in the wrong direction from the bus station in Lima. Â God, I was happy to be off that bus. Â Little did I know that I was going to be doing a lot more sitting over the next few days. 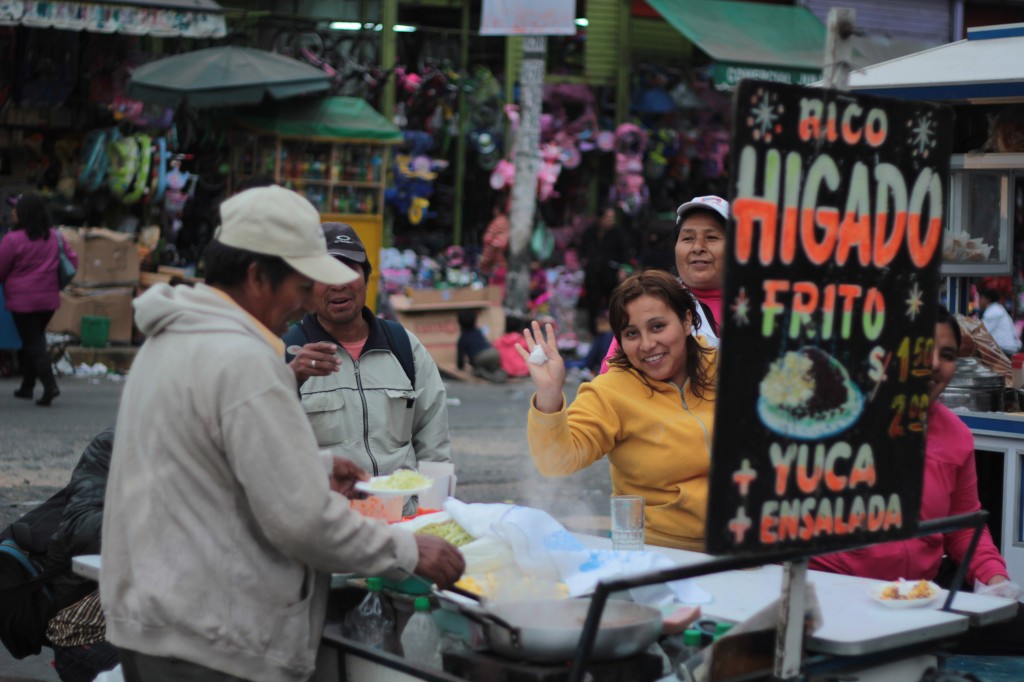 Before I felt the effects of the insalata, I was pretty pumped about myÂ accommodations. Â The walk to bathroom was approximately half a kilometer, and I had to do a few times an hour. Â Looking at my watch, I was pumped when 40 minutes had passed before my last trip. Â It snuck up on me once overnight, and I ran to the window and inadvertently puked on a dog. Â I had no strength to laugh at this. Â I’m now laughing with a pouty face thinking of the moment; guilty but still aware of the comedic value.

I forget what this church is, but here’s the library inside in which they don’t allow pictures. 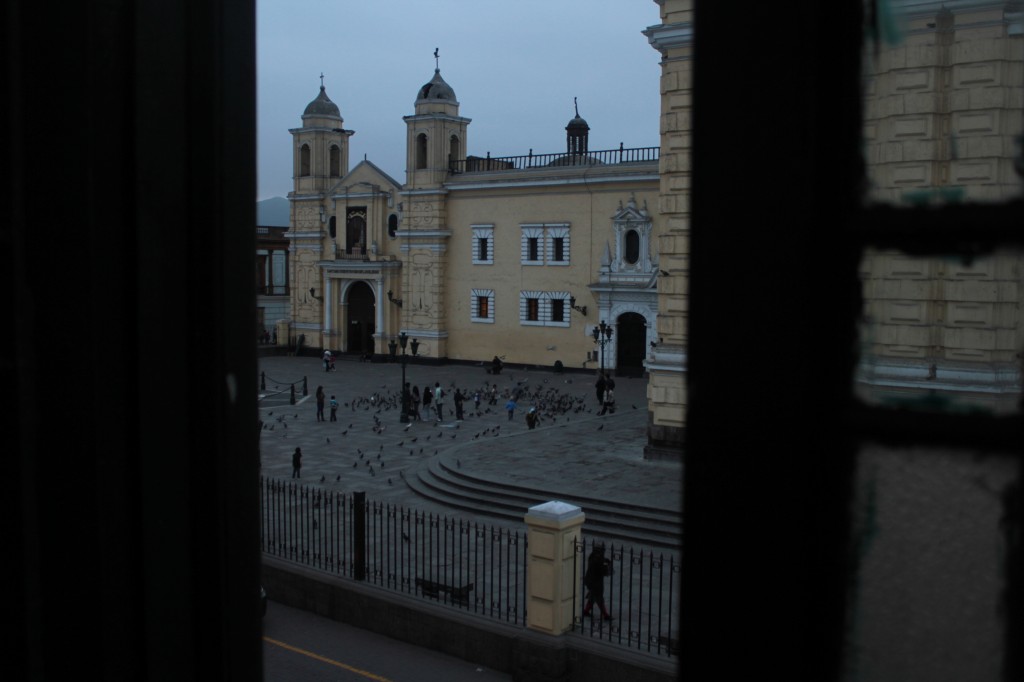 Two days later and I am back outdoors. Â I learned that hotel I was staying at was hourly. Â In the room sleeping and waiting for my next trip to the bathroom, it sounded like this:

It happened three times that day. 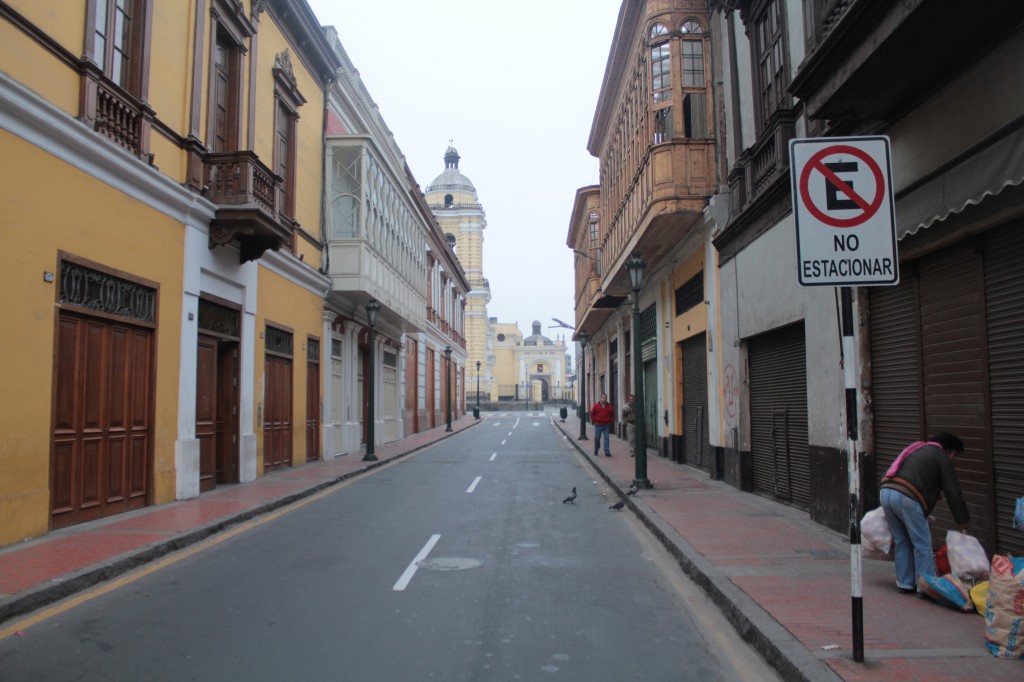 And aside from food, that was my Lima experience. Â Next post, Food in Lima, Peru.

Next post: What To Expect From A Turkey Food Tour