Warning: "continue" targeting switch is equivalent to "break". Did you mean to use "continue 2"? in /home/blounp/wanderingfoodie.com/wp-content/plugins/jetpack/_inc/lib/class.media-summary.php on line 87
 Lima, Peru – Part One
≡ Menu 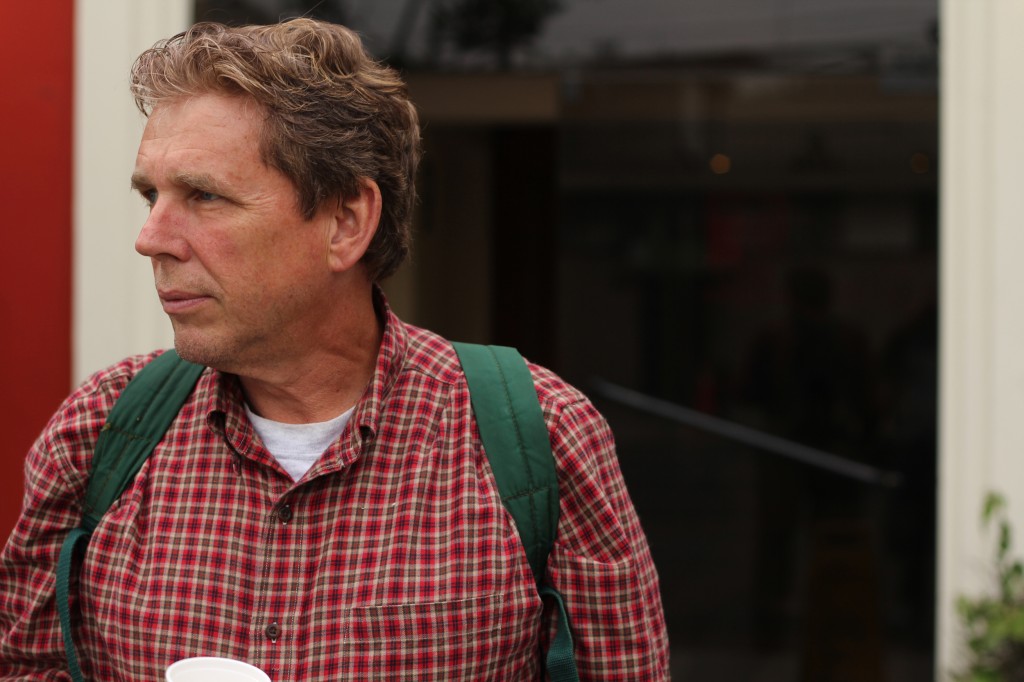 We got an overnight flight from JFK to Lima and got our day started at about 7:45. Â Lima is closed on Friday morning at 7:45. Â The McDonald’s in Lima doesn’t open until 7Am. Â Don’t worry, fans residing in Lima, McDonald’s breakfast in Peru absolutely sucks. I think there would be some kind of Arab-Spring-like uprising if the general populous knew how much better our McDonald’s breakfasts are in America. Â Ignorance is bliss, I guess.

I like this colorful bus, and so does the driver. Â They’re all much more colorful than this one down here – this was just my second photo. Â I just saw a public bus today with a “No Fear” sticker on it today. My favorite bus sticker was one that advertised the fact that the bus had a bathroom with the word “BAÃ‘OS” over one of those 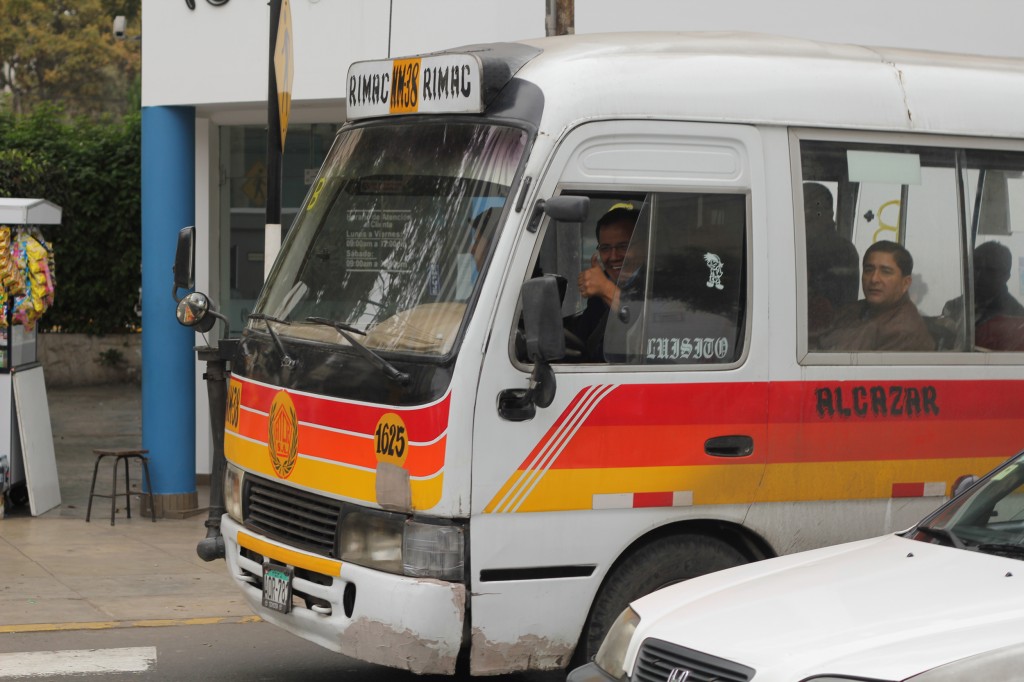 I wonder if this is legal – having a casino named “Atlantic City.” Â You would think that since things like Champagne have their copyright, AC would have theirs. Â I was tempted to put this in my South American Copyright Infringement post, but this is certainly a grey area. 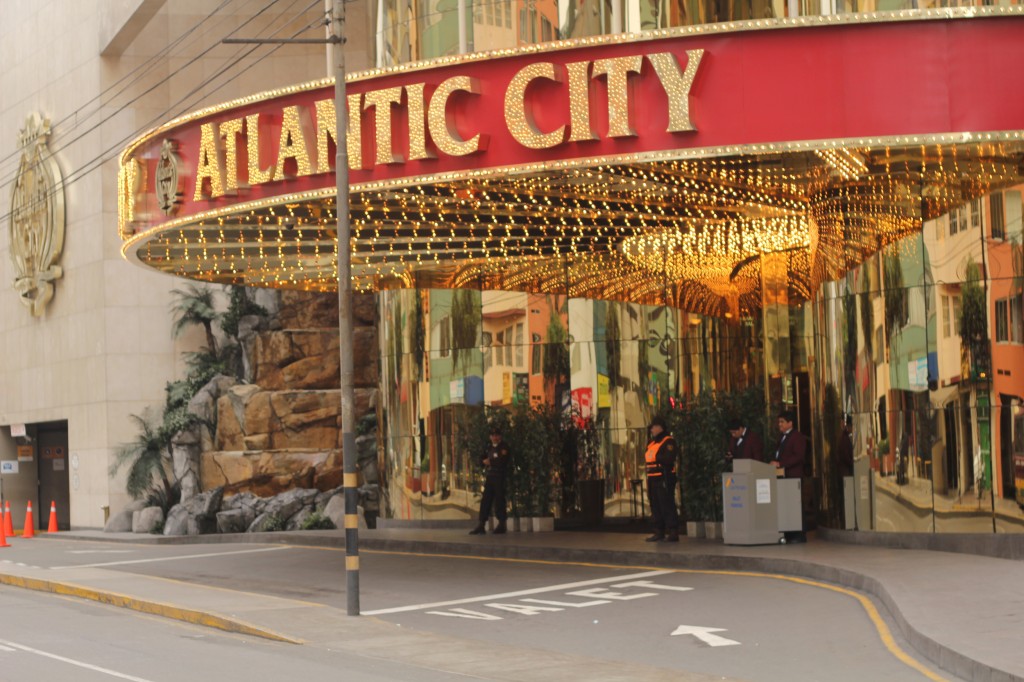 Gato. Â John Kennedy square in Miraflores (he’s never been here, but yes, it’s that John Kennedy) is filled with cats. Â There’s one gated area next to a church that has about 10 cats lazing about at any given time. Â It has a statue of a lady who is the patron saint of sleeping 18 hours a day. 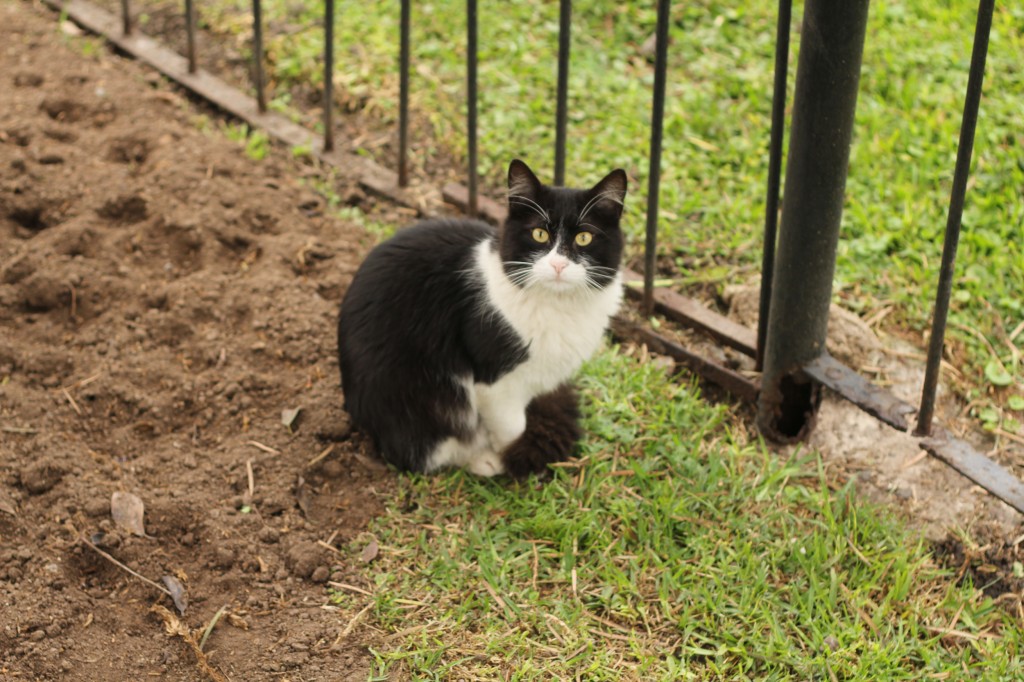 It’s overcast today in the Love Park in Miraflores. Â Most of the days started overcast and then cleared off a bit near the end. Â This lighthouse is only for decoration.

The cactus is trying to say something. 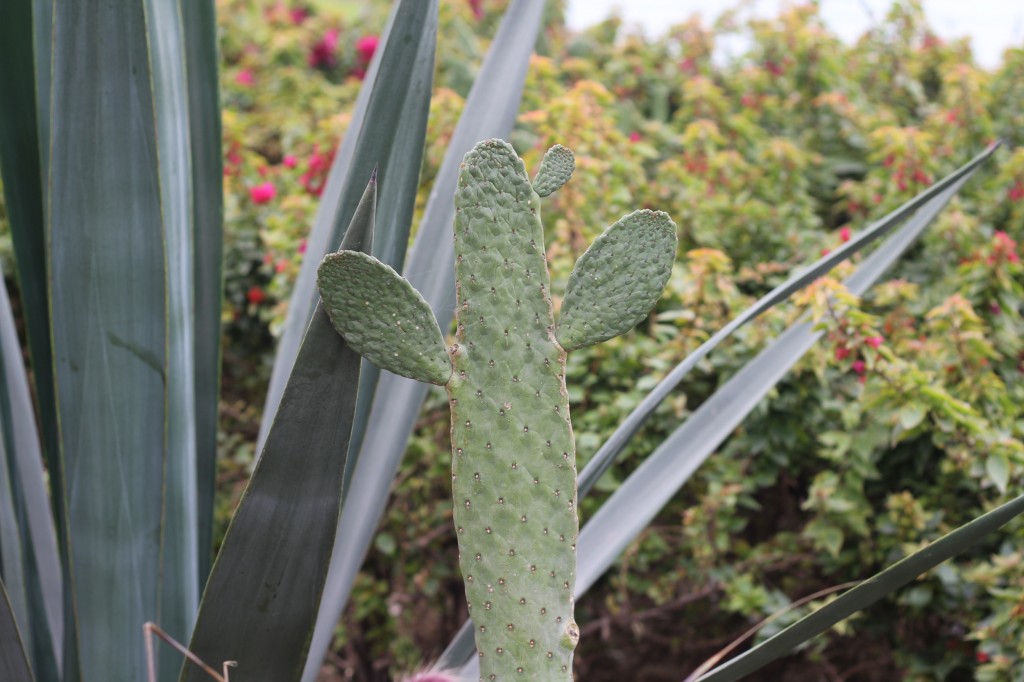 Mosaics in the Love Park. Â It’s called the Love Park because of a statue of two people making out right in the middle of the park. Â I’m guessing it’s also a good place to make out at night. 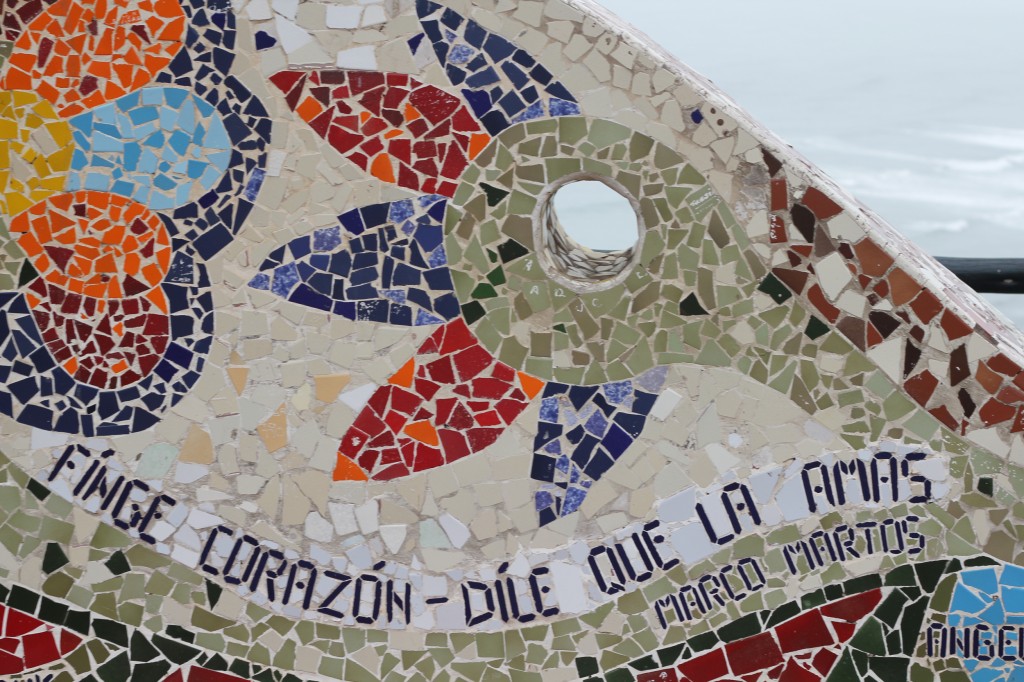 Back in JFK square, I missed this before, but there are Dinosaurs. Â They got big ol’ dinosaur brains. 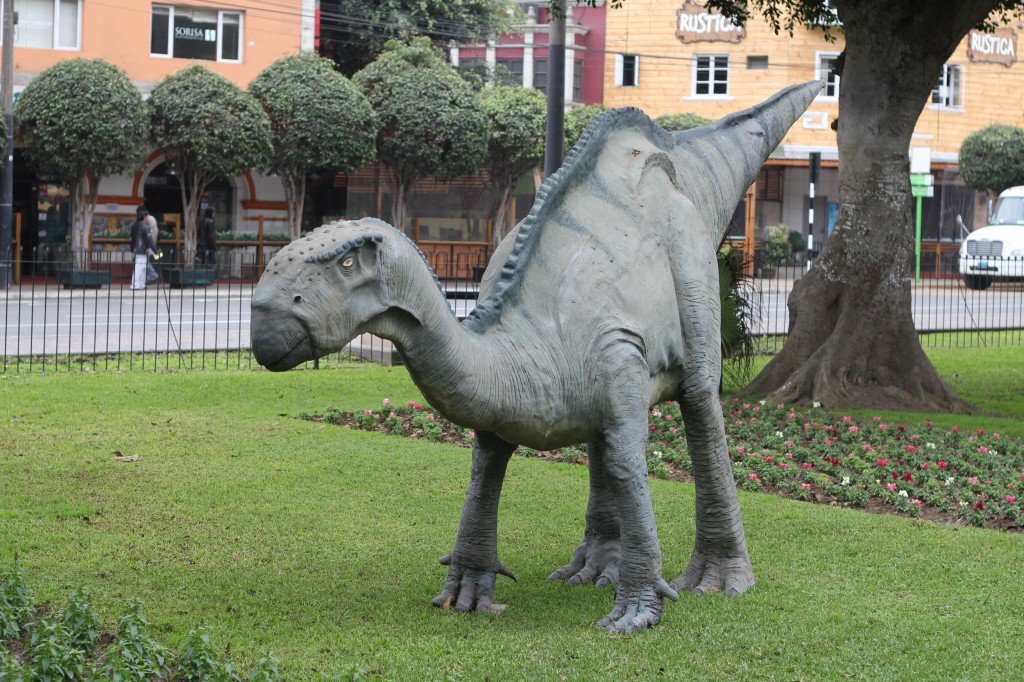 This is a VW armored truck. Â The guys manning the armored trucks look way more badass here than they do in the states. Â They have helmets and shotguns and it just looks like they are much more prepared for when shit goes down. 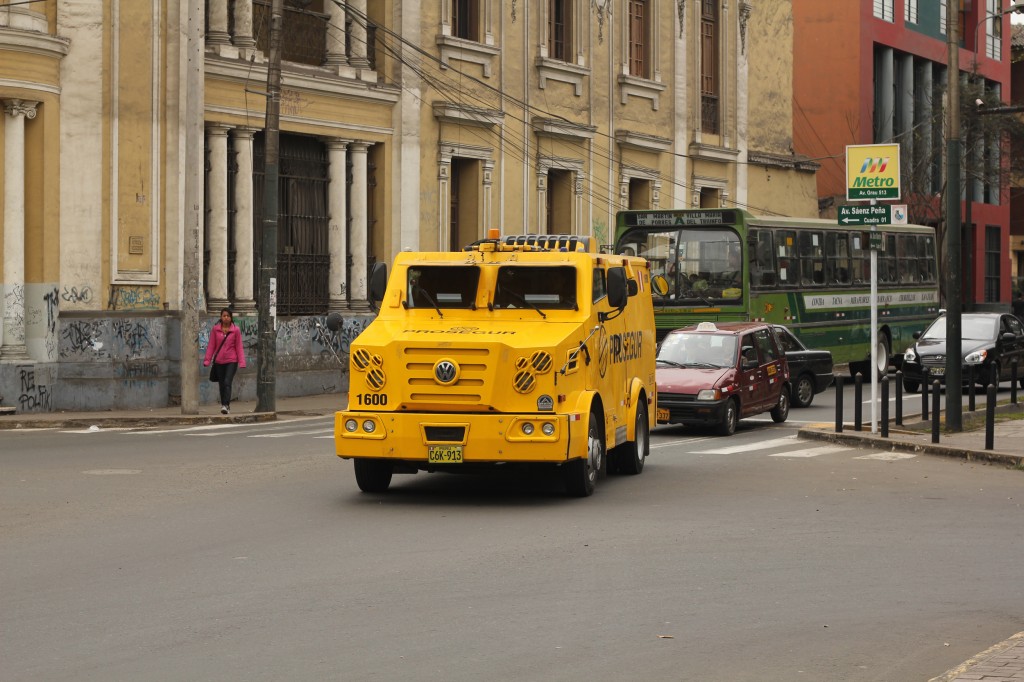 Architecture. Â No idea where this was. 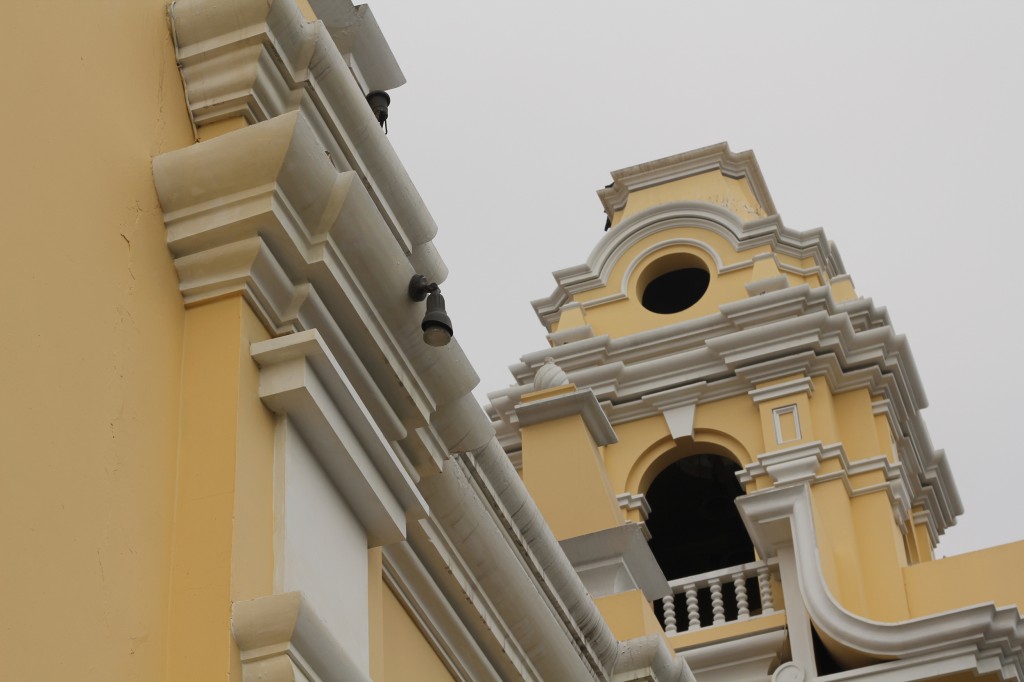 Oh, it was on a street in Barranco going toward this old church. Â My dad says these are Vultures but they could be Cormorants. They were vultures. Â Not a lot of birds around here, even aquatic birds, and this place is right on the ocean. 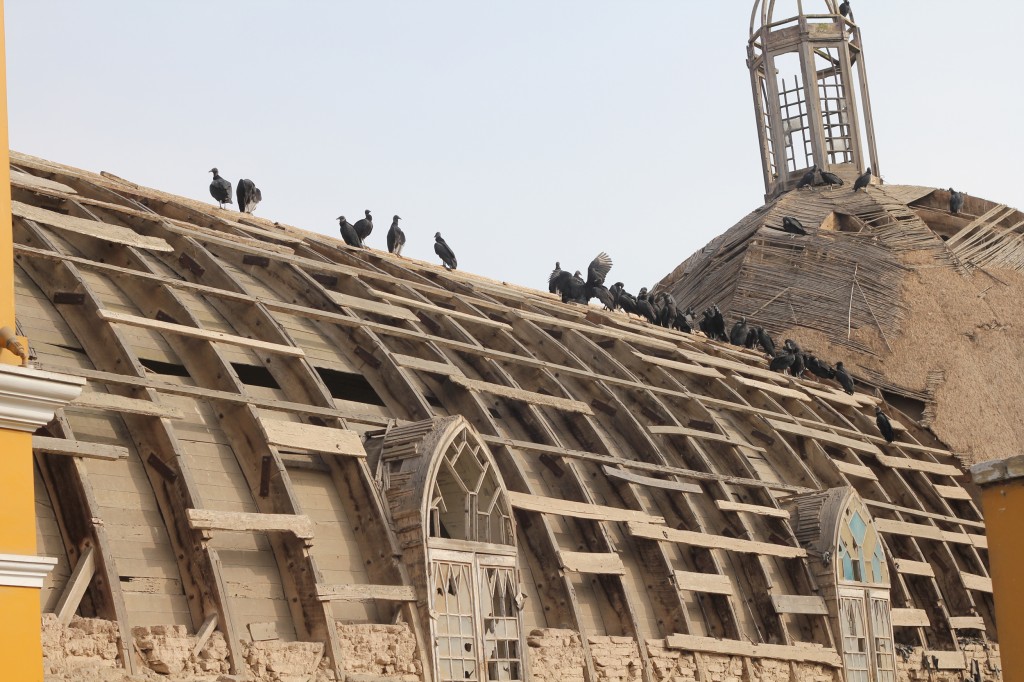 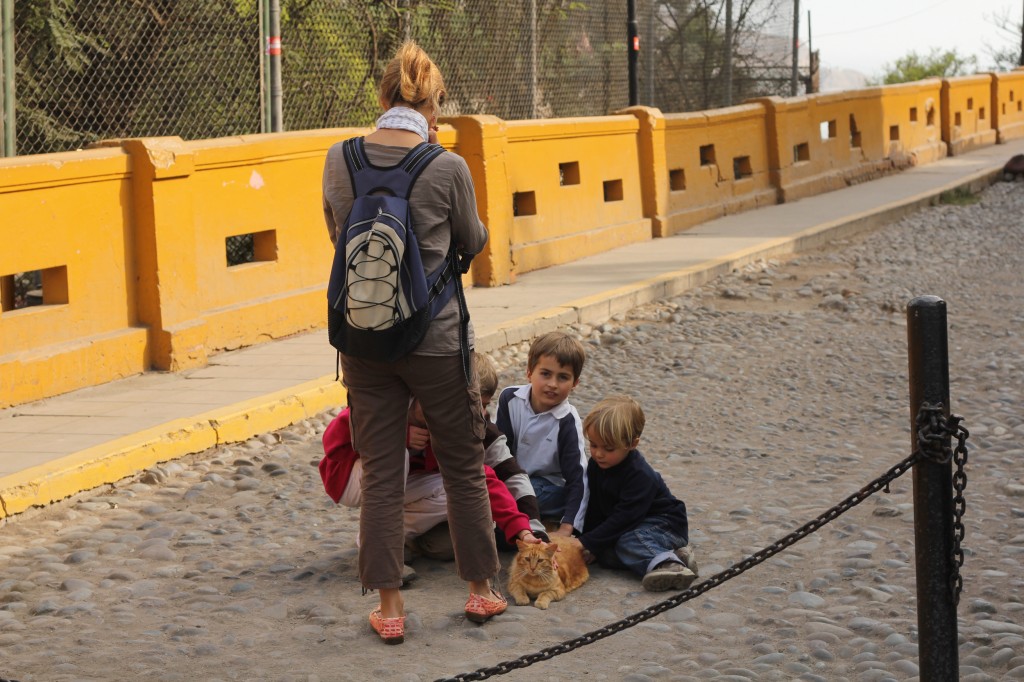 This is the place in Barranco where they try to sell you some touristy shit. Â Not buying. Â I have purchased two bracelets, sunglasses, a sweater, and an Inca Cola T-shirt so far. Â The sweater and the T-shirt both have holes in the armpits, but the sweater has gum on it. Â I don’t know where the sweater is anymore. 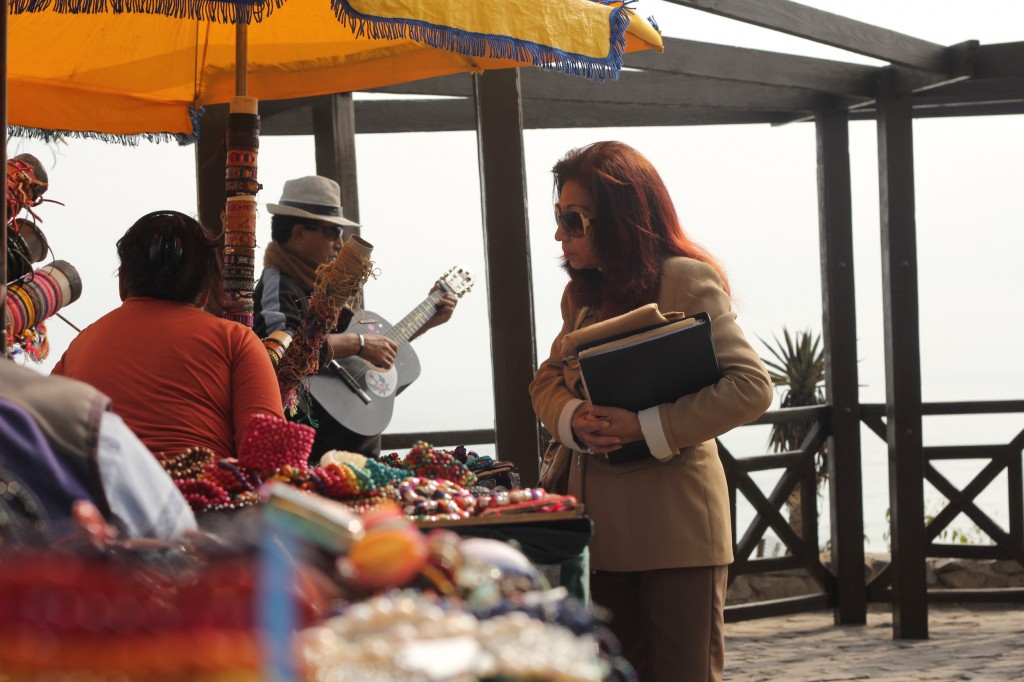 This looked like the place to hang out at if we were going to be relaxing in Barranco (we eventually did). 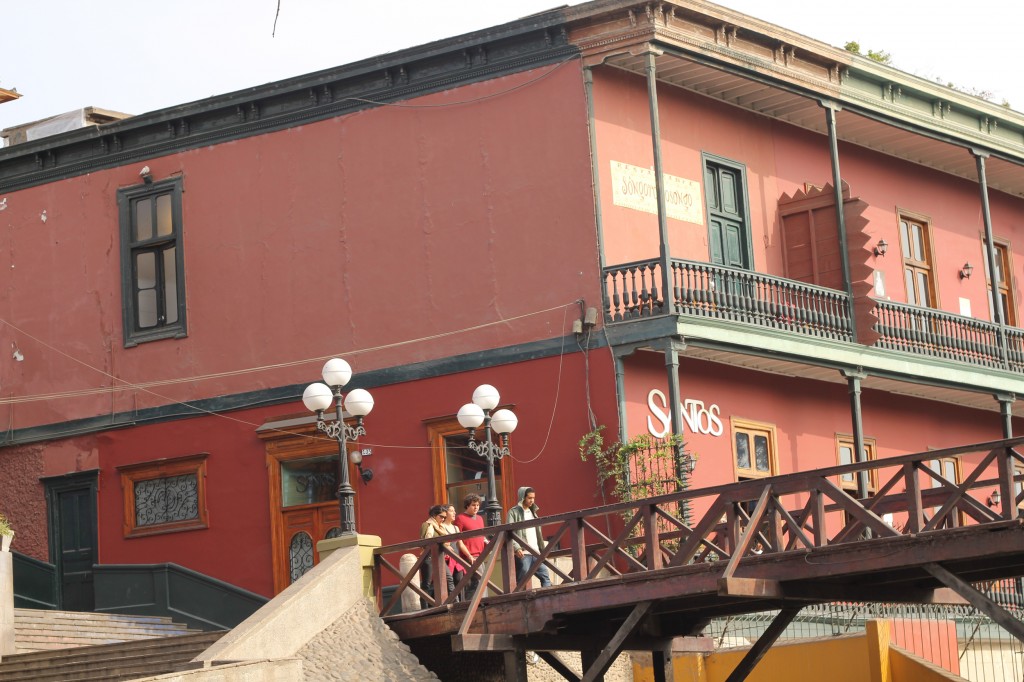 Coke? Â Weed? Â What do you want, we got it. Â In most of the cities here, I am propositioned for drugs. Â Those people have the drugs. 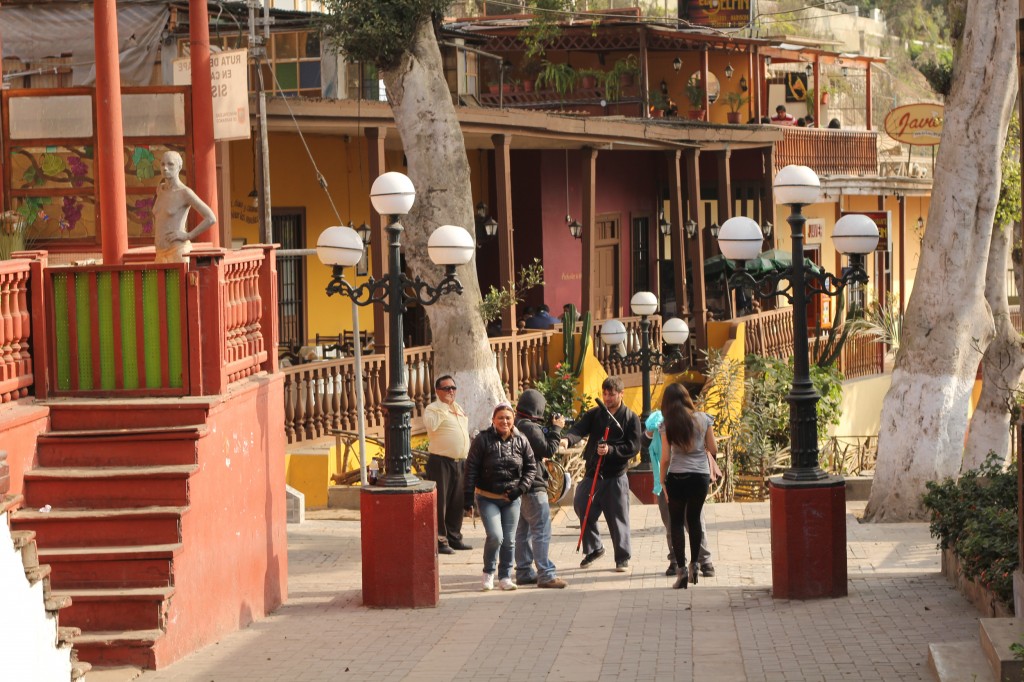 Another shot of the Miraflores skyline.

Dad and a highway. 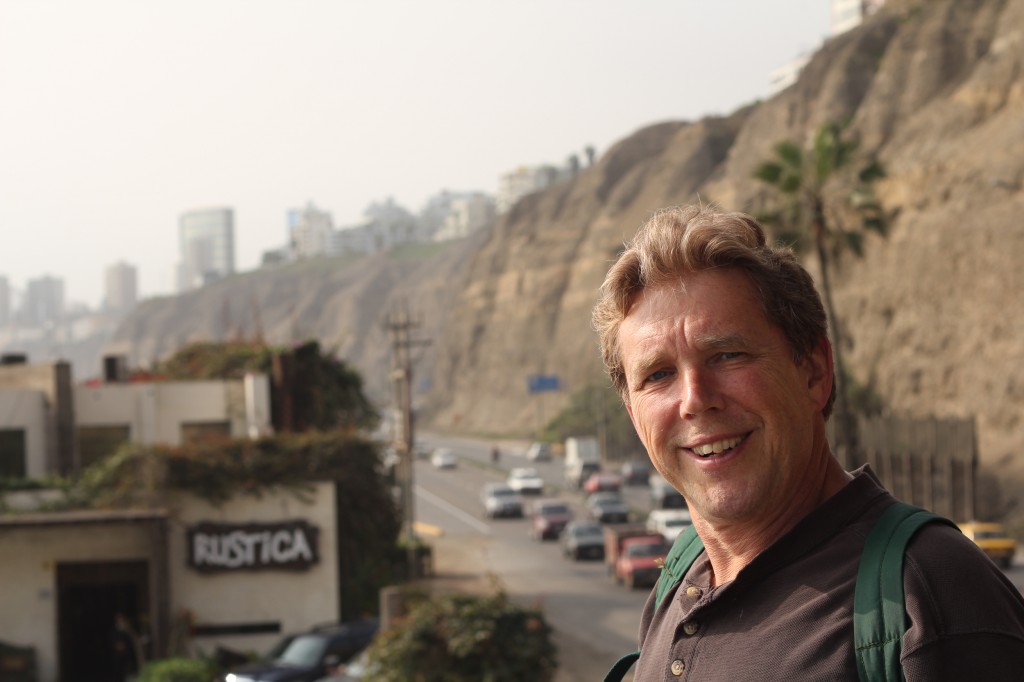 I tried Google translate on that one, but it doesn’t understand “PUNZOCORTANTES.” Â I’m guessing something like PCBs. 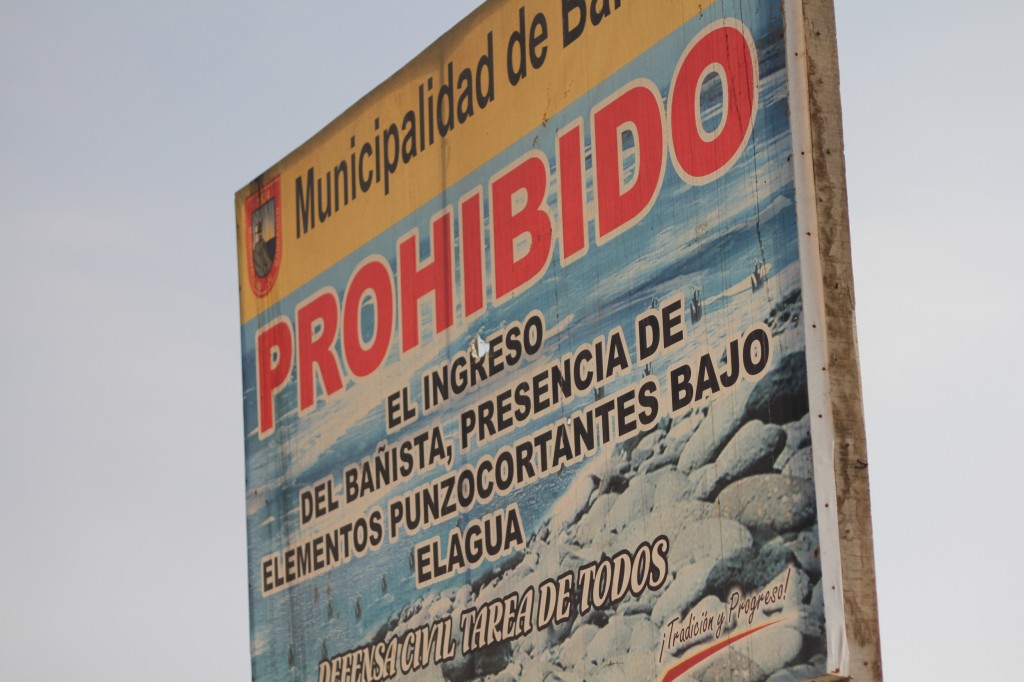 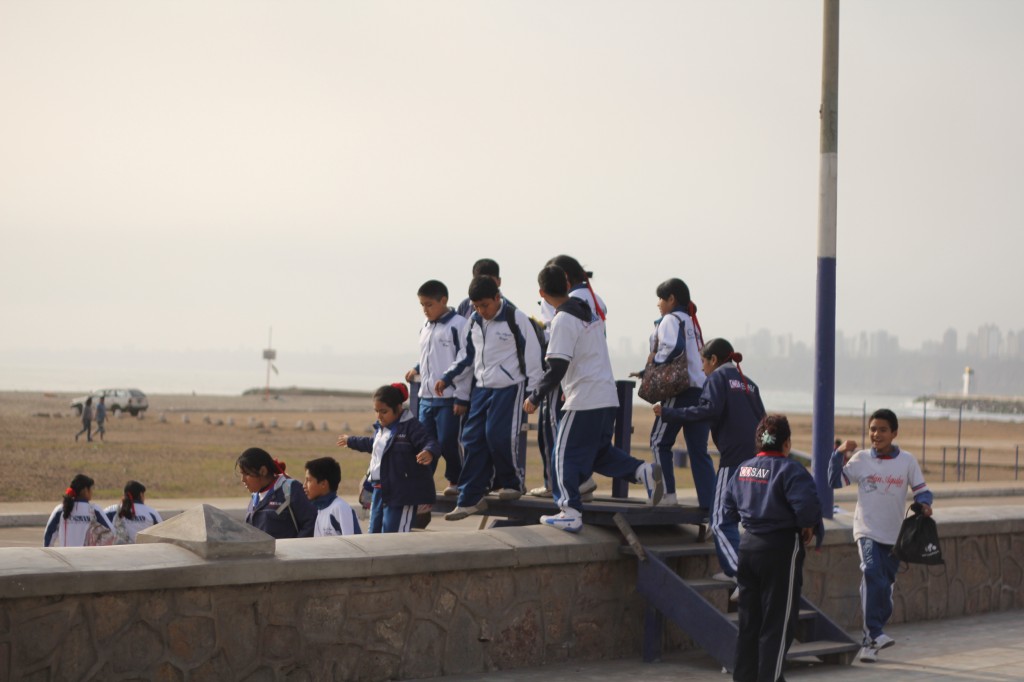 Skyline with the fisherman of Chorillos in the forefront. 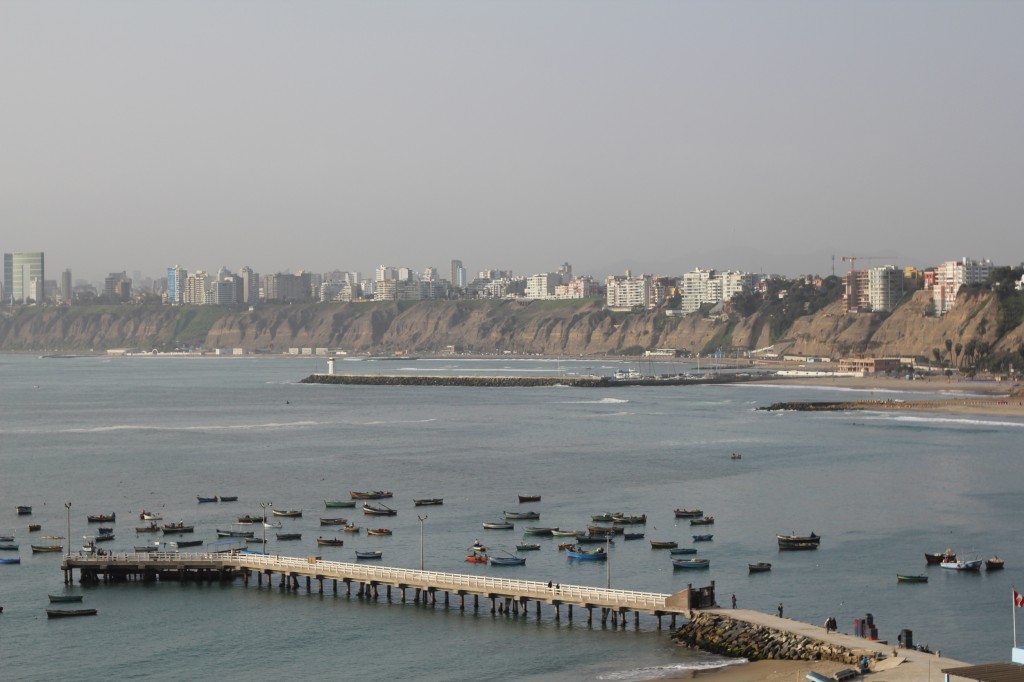 Architecture in Chorillos. Â For price to value, Chorillos is probably one of the better places to live in Lima. Â There are some pretty terrible places in Chorillos, and you probably wouldn’t want to be out alone at night in most of it… On second thought, if you can afford Miraflores, go ahead and afford it. 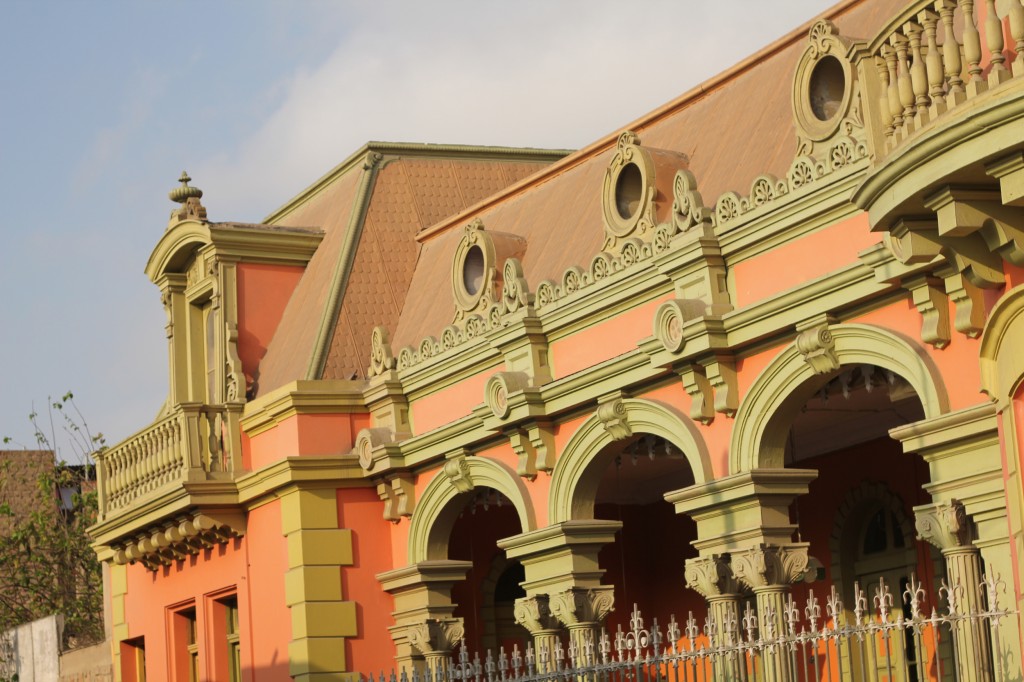 On our way up to the Jesus. 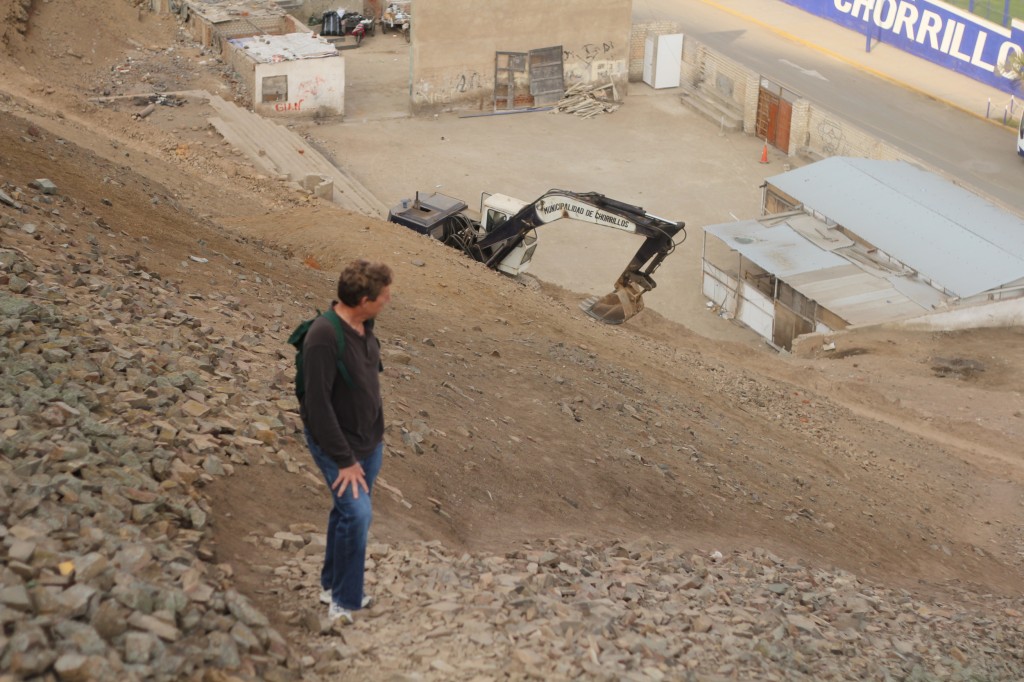 Don’t know who this guy is, but he’s got a statue. I want a statue. 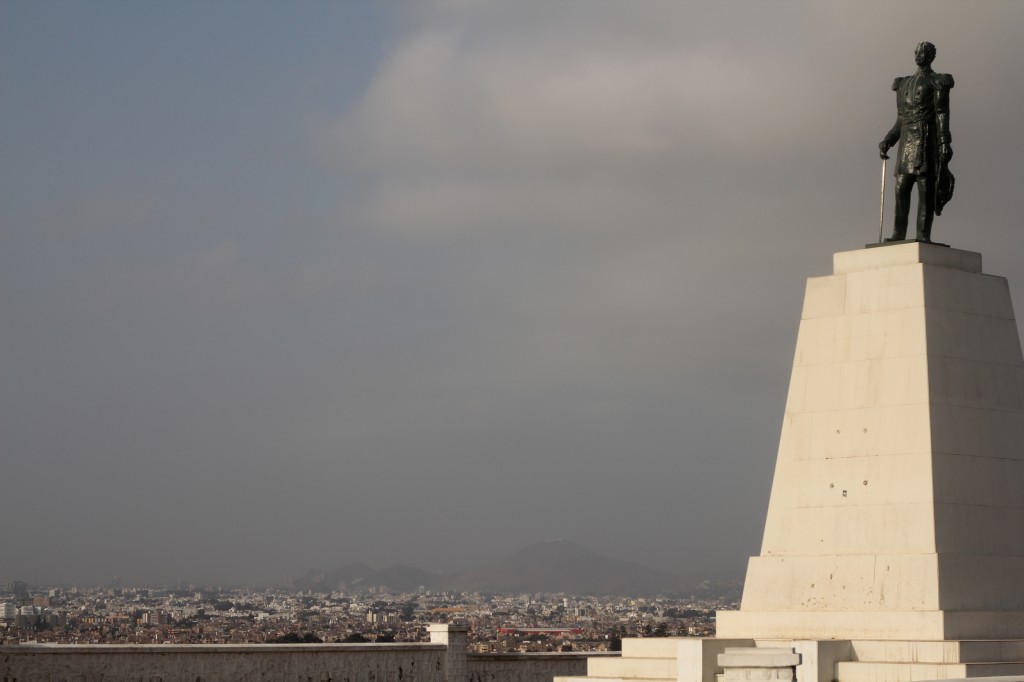 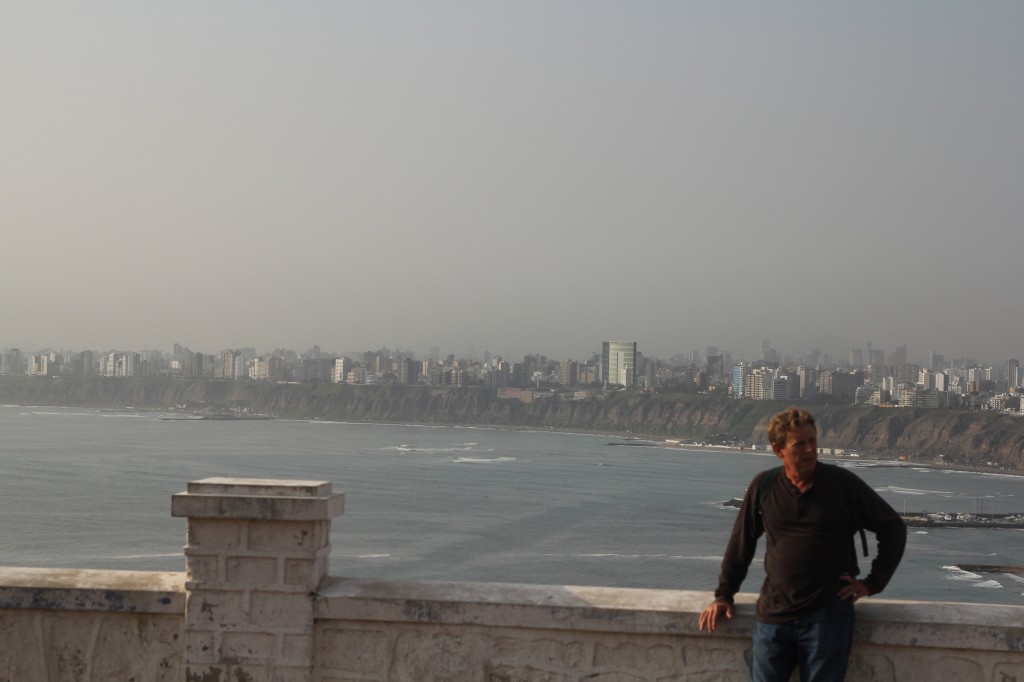 The houses in Lima are mostly half-finished. Â There’s always iron rods erupting from the concrete on the roofs of the homes, and there’s all sorts of trash on top. Â Trash, people probably just throw up there, our tour guide says the iron rods are up there because the next generation living there is going to finish the home someday. 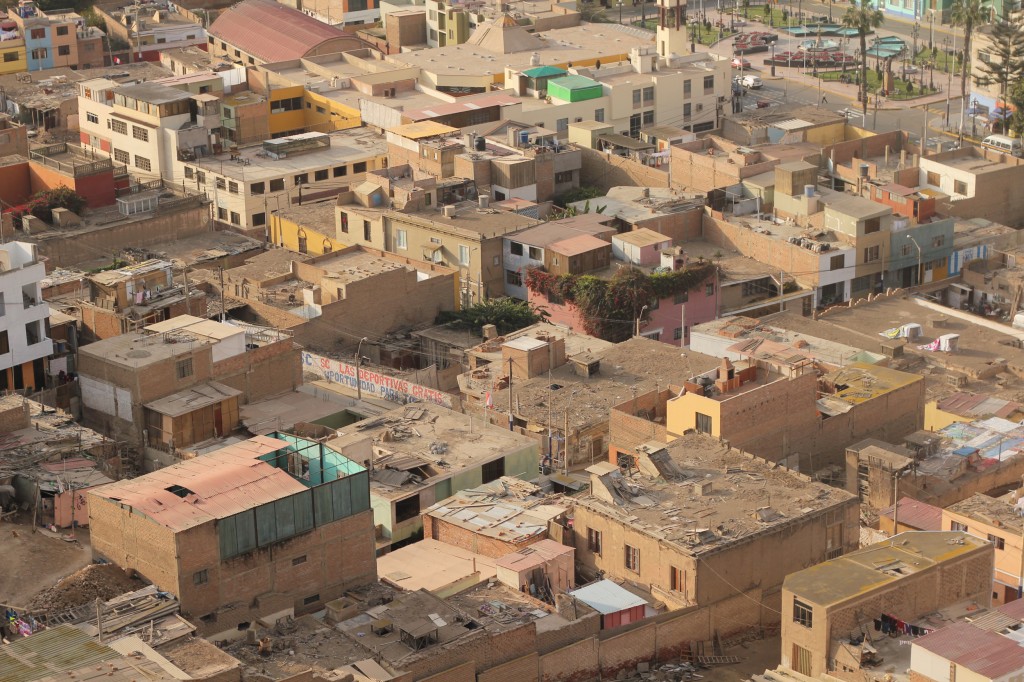 Another guy with a statue. 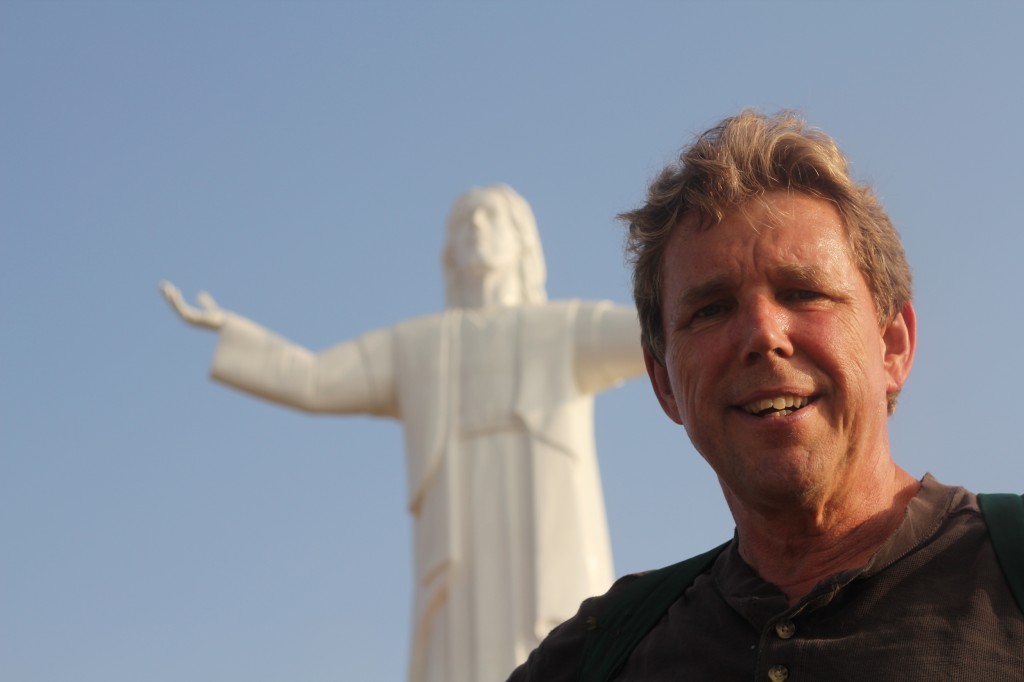 How many different scenic views do we need here? 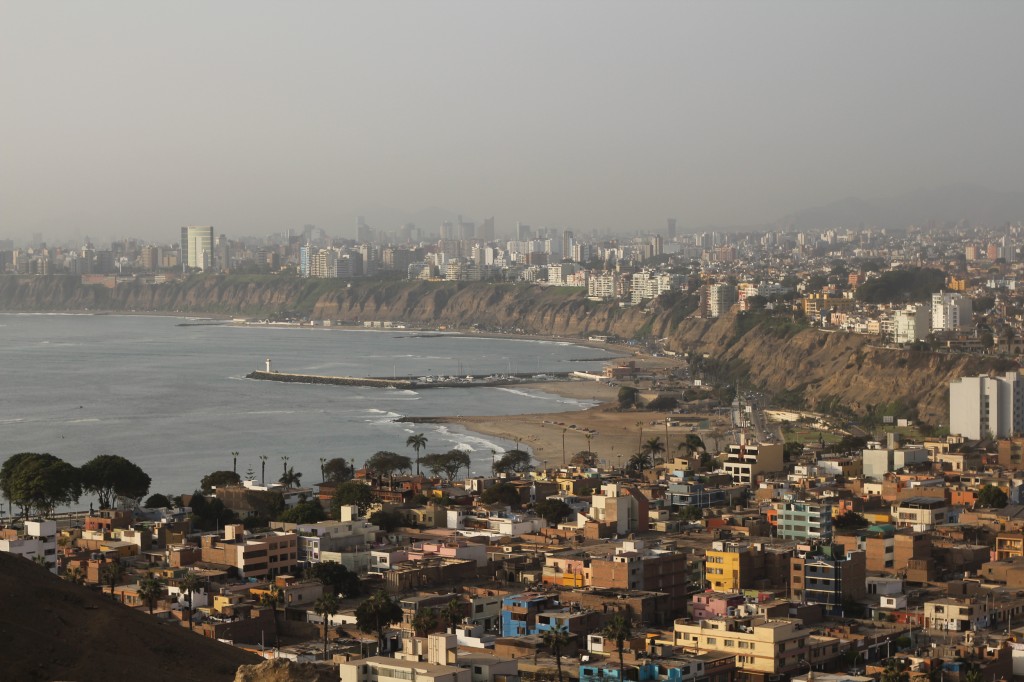 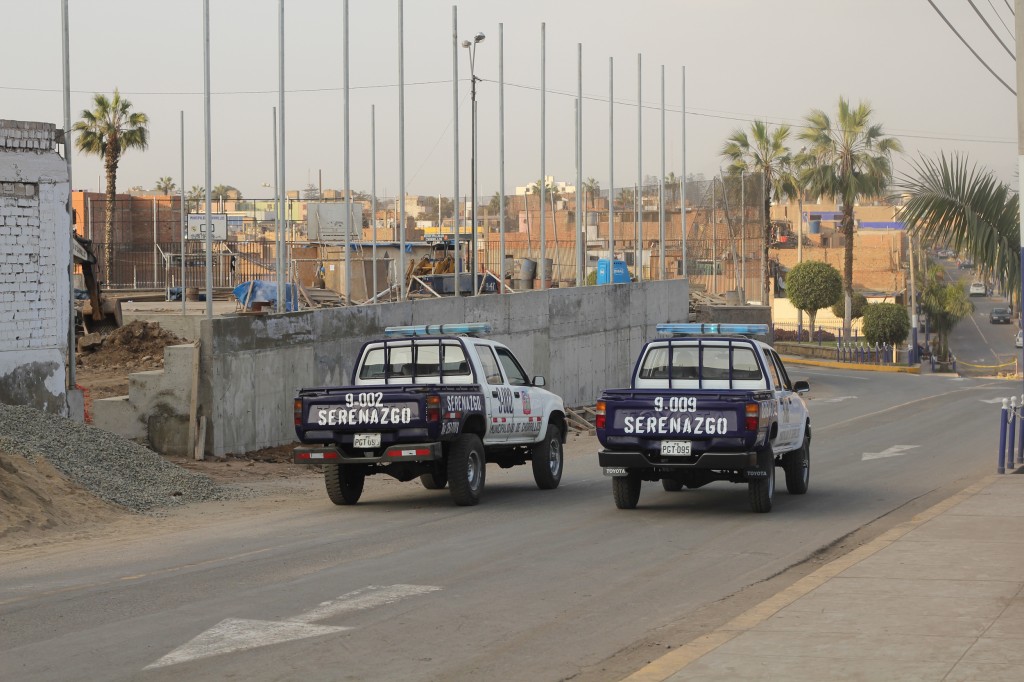 One of the streets where someone told me I would get my camera stolen. 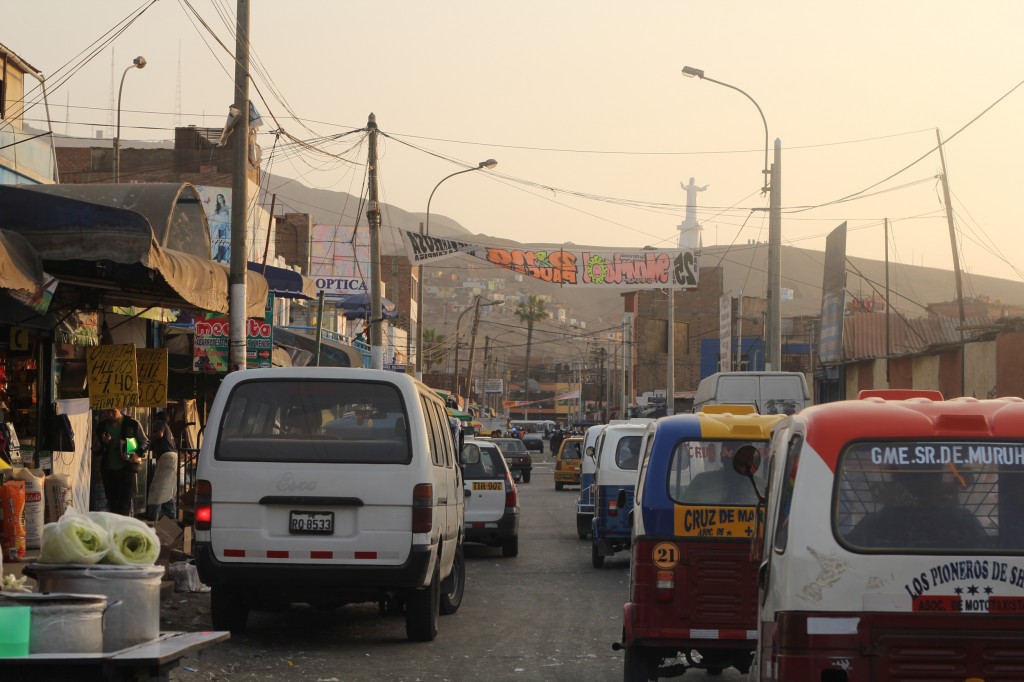 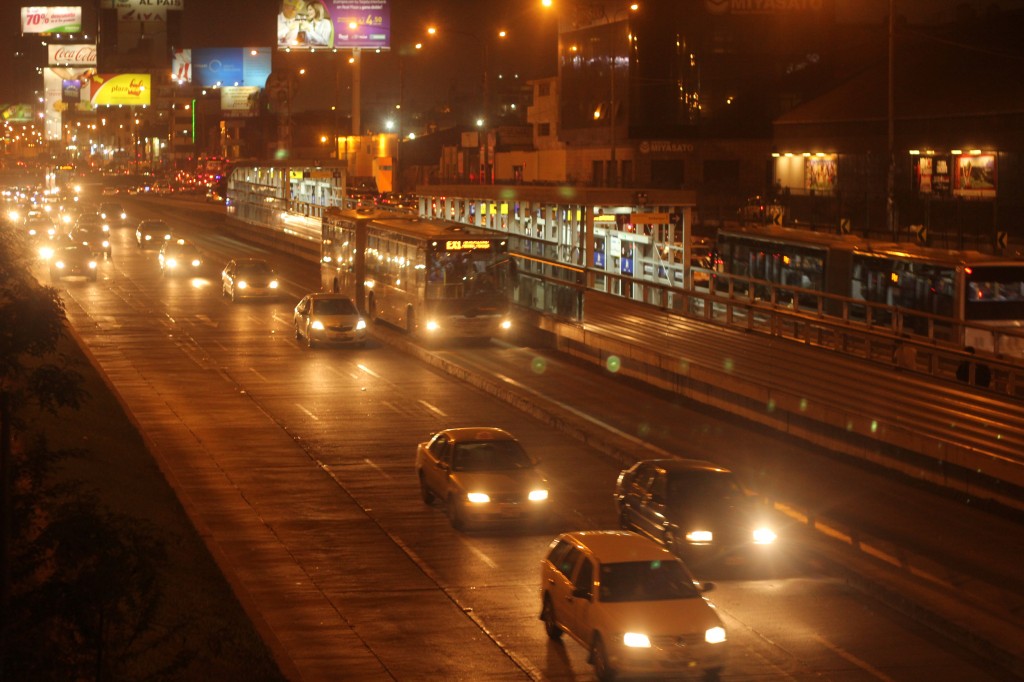 Dad and I figured it out – we walked 20 kilometers today. Â I’m not usually a fan of walking tours because you don’t get to explore. Â We might not have seen everything or found out about all the interesting stuff we walked by, but we sure learned a lot about the city.