Many Scandinavian capital cities are built by the sea, and a cruise is a great way to visit them. There are many options for cruises from Swedish capital Stockholm to Helsinki, the capital of Finland, or to Turku on Finland’s southwest coast. The archipelagos between Finland and Sweden are especially scenic. Norway’s coastline is also famous for its scenery and many cruise ships make the long journey north, exploring the fjords and stopping in some of the coastal cities along the way. If youâ€™re exploring Scandinavia by ship, you can also explore further afield combining this with Baltic cruises, as some itineraries allow you to visit Estonia, Latvia and Lithuania and other such countries, as well as Scandinavia.

One of the best things about visiting Scandinavia is the opportunity to sample the food. The Nordic cuisine is now considered to be as good for you as the healthy Mediterranean cuisine. A typical Scandinavian diet includes a lot of freshly caught fish, local fresh produce, berries, rye bread and dairy products.

The Scandinavian countries have many similarities in their cuisines, but each country has its own specialties. When visiting the capital cities, remember to try local delicacies. Most cities have excellent restaurants but they also have local markets where you can sample fresh produce and fresh seafood. Most visitors want to try gravlax, salmon that has been preserved in salt and can be eaten on its own or with bread or potatoes. Different types of herring are also popular, and a typical delicacy in the summertime is a plate of new potatoes with pickled herring.

Norway’s coast is known for its excellent fish, and salmon is a delicacy, it is widely available and is used in many local dishes; try the many varieties of smoked salmon while visiting. Stockholm, the Swedish capital is famous for its stylish restaurants. Traditional delicacies include pickled herring, crispbread and Swedish meatballs. Not forgetting SmÃ¶rgÃ¥sbord, which is a traditional Swedish buffet consisting of hot or cold dishes and always includes bread, butter and cheese, but modern Swedish cuisine is also international and combines many different flavors. 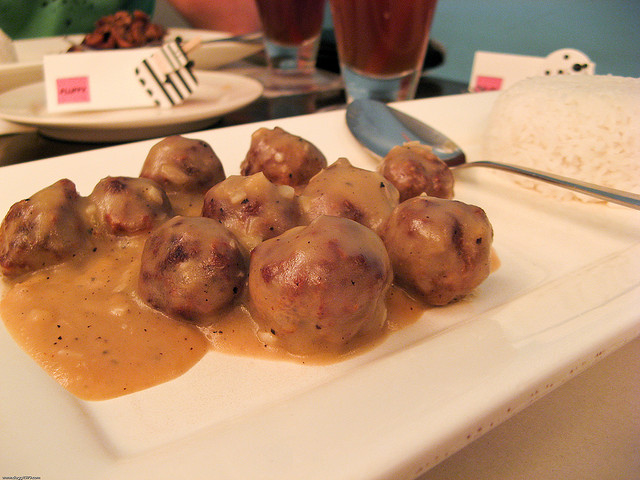 Helsinki, the capital of Finland, is a stop on most Scandinavian cruises and here you have many opportunities to sample traditional and modern Finnish cuisine. Fish is a big part of the Finnish diet, and high quality seafood is widely available. Those who want to try more exotic delicacies, such as reindeer meat, can also find it in Helsinki.

Scandinavia, itâ€™s not just about fjords and greenery. Thereâ€™s some real fine cuisine to be enjoyed. Combining that with a boat tripâ€¦ you just canâ€™t go wrong.

This post printed with consideration from Caliberi.com. Images by dbgg1979 and Austin Keys, used under Creative Commons license.

Next post: Live Blogging The Next Food Network Star – Week 7