BlogHer Event for Tourism Australia at The Sunburnt Calf

I recently went to a lunch profiling gastrotourism in Australia. It was hosted by Tourism Australia, and I talked mostly to the person representing the Northern Territories. Her name was Kylie (quite Australian), and I could tell she was really proud of the food culture. The event was held at the Sunburnt Calf, but I don’t think any of this stuff is available there on a regular day. I think it might be available at some of the Sunburnt Calf’s sister restaurants, but I’m not sure. If you can find the lamb, the oysters, and the desserts somewhere in the city, though, you need to tell me about it. That stuff was flat-out amazing.

It’s funny, I have recently been invited to a lot more of these. I’ve started accepting the invitations more often as well, and I’m enjoying meeting some of my old “friends.” Mostly people I’ve only met once or twice, and some of them don’t even really like me. It’s weird being a male food blogger. Seriously, it was me and David Leite there today. 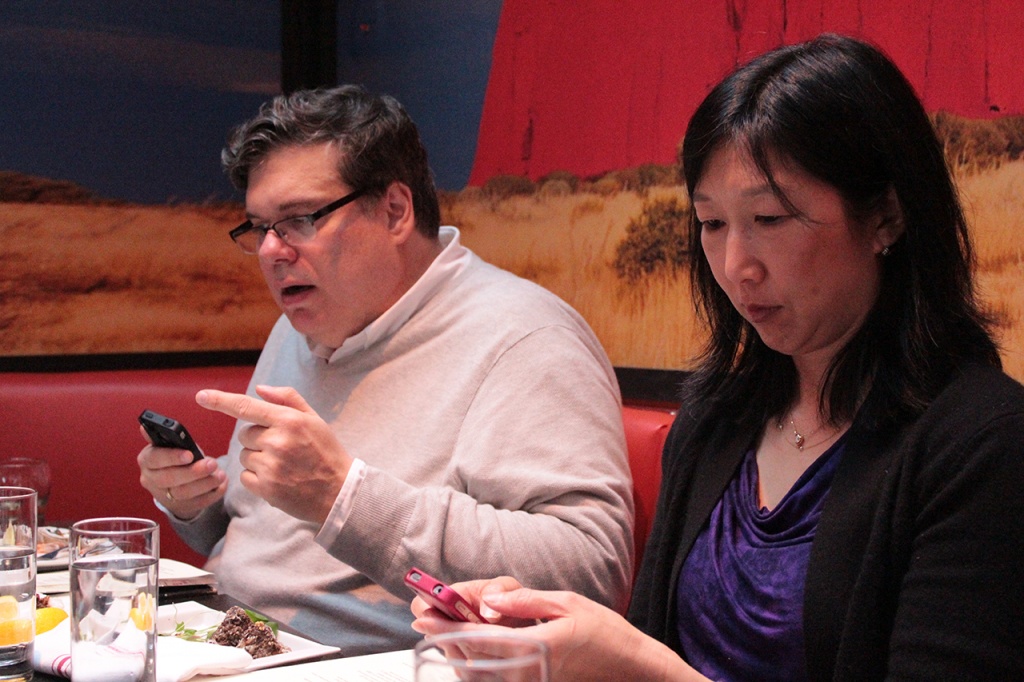 It’s nice to make new friends, and we’ll see where my food inclinations in New York City lie after this year. I am having fun doing this kind of stuff, and I’d like to do more. It would give me a reason to stay here longer this time. 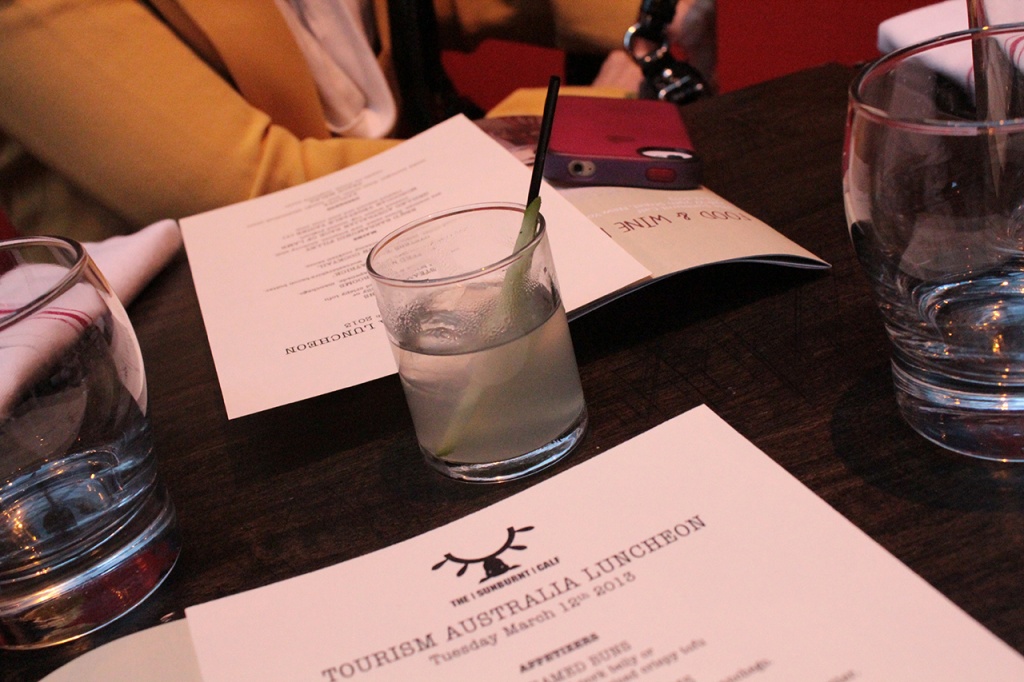 Gina resting her iPhone before the tempest

On to the food: 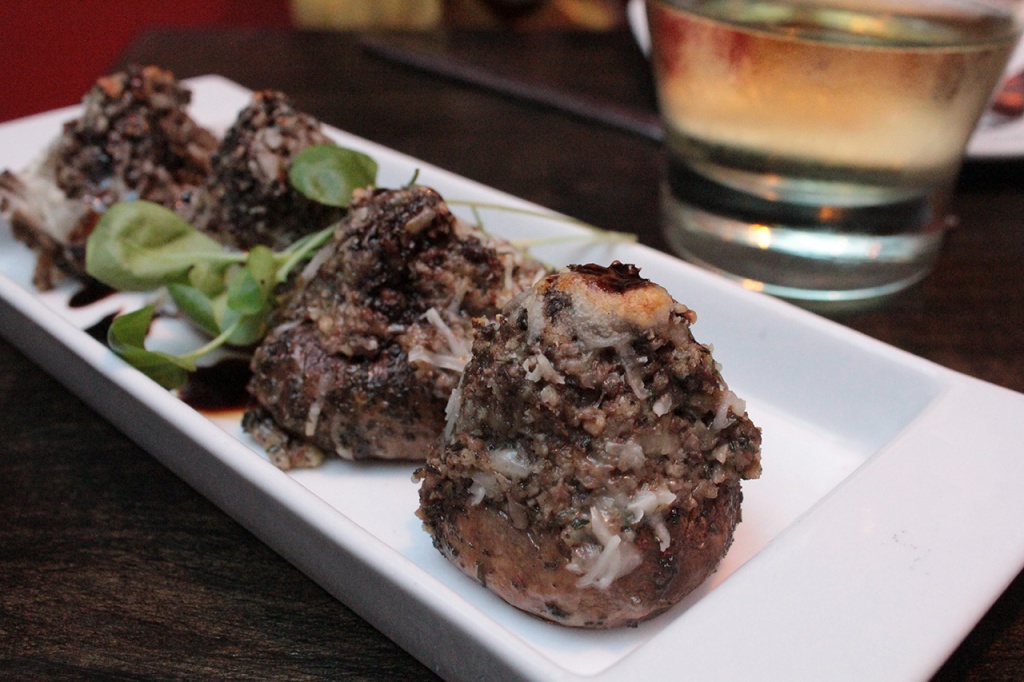 A nice start to the meal; pop it in your mouth and you’re no longer super hungry (I like to come to these things super hungry for obvious reasons). It was accompanied by a shrimp cocktail with a creamy/spicy cocktail sauce, but none of my pictures of the shrimp were that great. 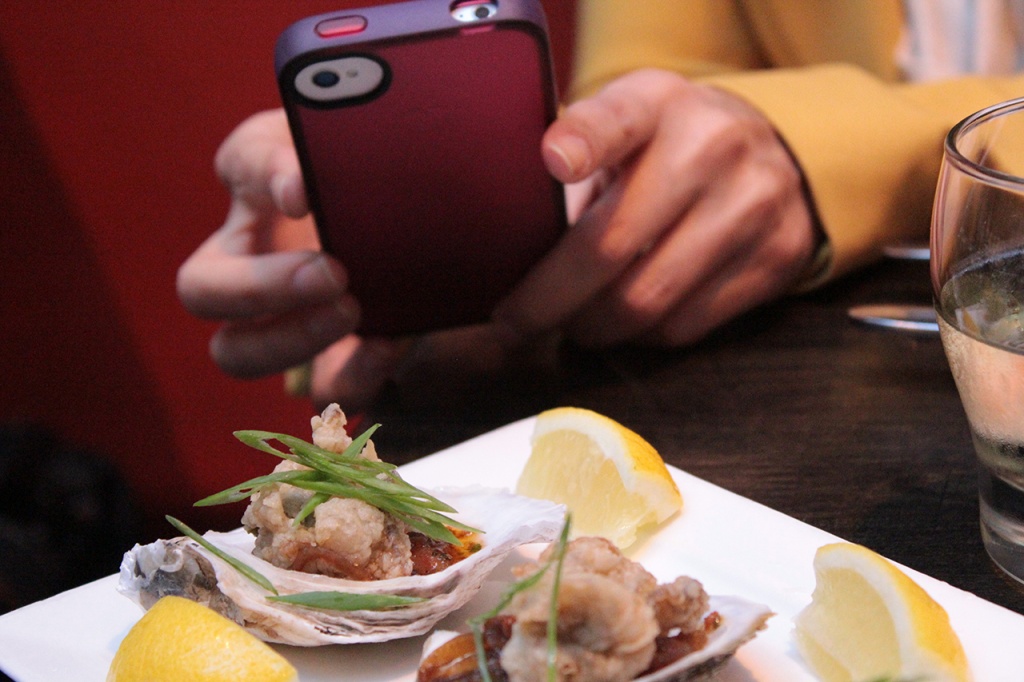 You had me at “tempura-fried oysters,” you had my first born at “Worcestershire bacon butter.” 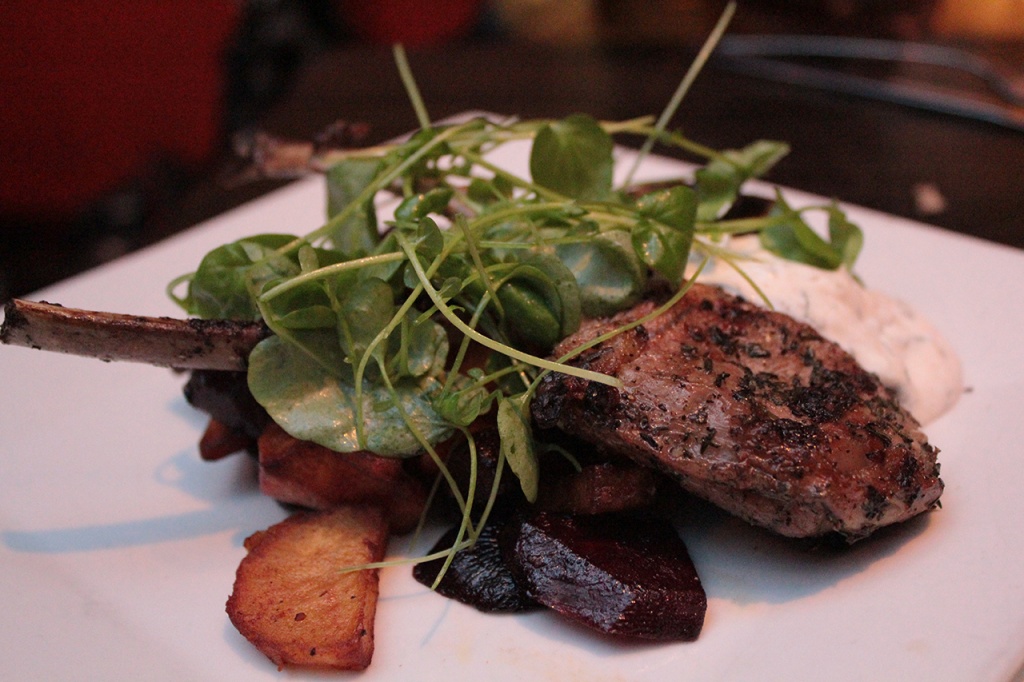 The entrÃ©e star. Gina and I agreed that it was hard to pass up lamb when served at a restaurant. I never like to order the same thing as a dining companion, and Gina was keen to try the fish as well, so I orderedâ€¦ 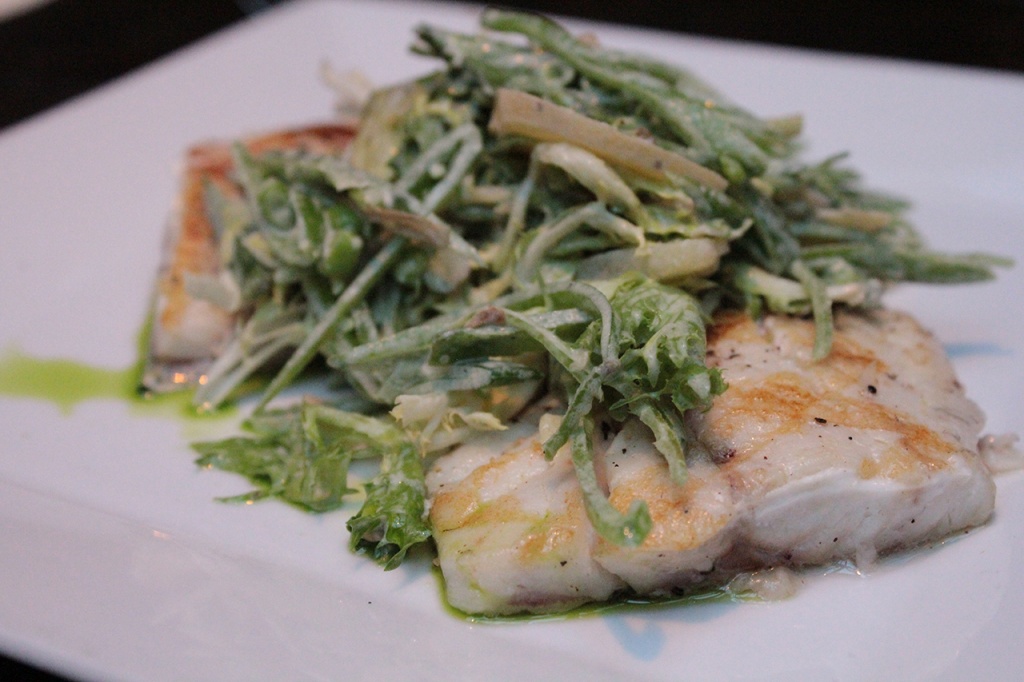 You’ll always get me with seafood on seafood. I wish they did more meat on meat – you know, different cuts of the cow prepared different ways in the same dish. I had a brisket/filet mignon last year that was mind-altering. 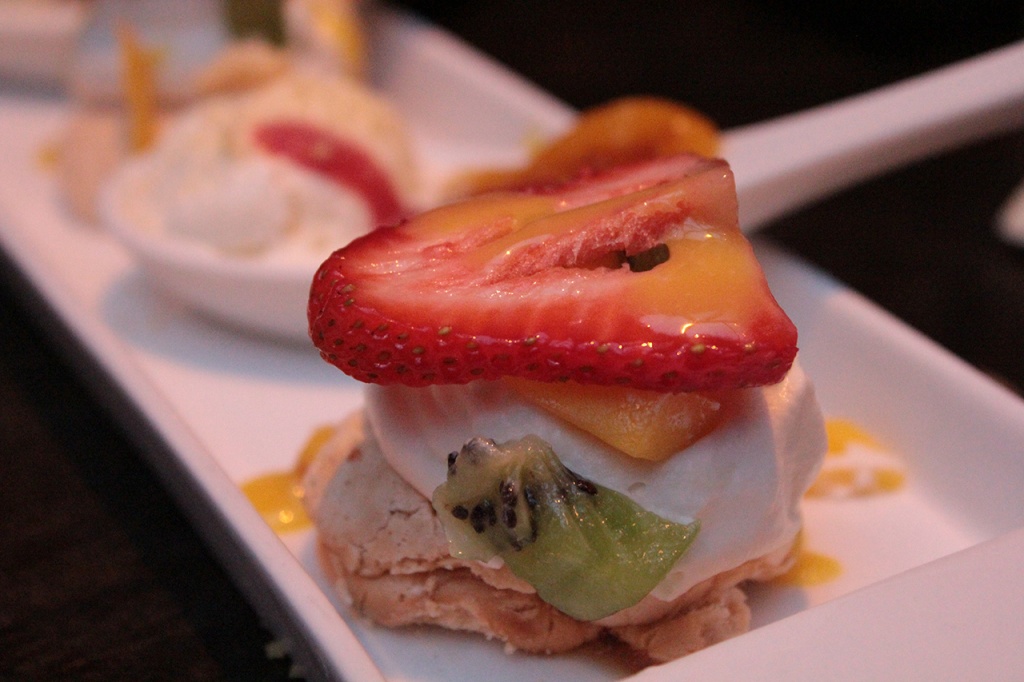 Yeah buddy; Rollin’ like a big shot. I love it when things taste expensive. This was right up there.

So back to the tourism part. People from each state in Australia talked about the different geographic food regions of the country. They were really well-informed. I had a question that I asked about aboriginal food, and they new it was of interest to us and said it was an emerging scene. I am curious to know what that tastes like.

What I was most interested in it was Tasmania. 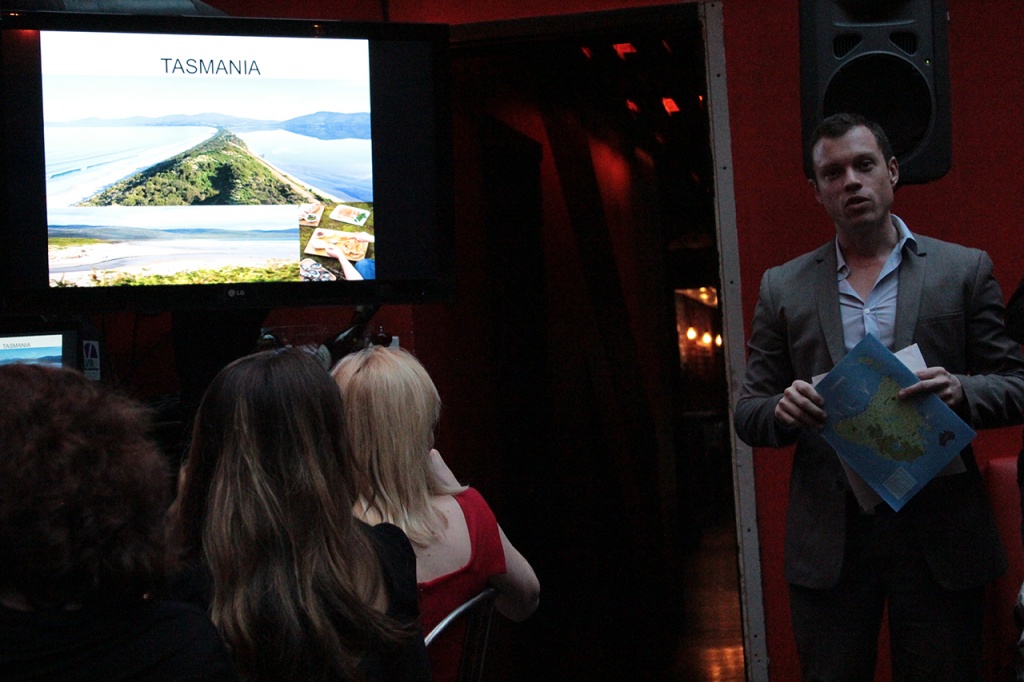 Tasmania has the cleanest air in the world and some of the cleanest water as well. I thought someplace like the South Pole would have take this title, but then maybe the South Pole attracts some pollution. Or maybe they donâ€™t care about these kinds of records down there and they donâ€™t even bother with them. Regardless, the guy from the Tasmanian tourist board talked about the produce down there and how visiting chefs raved about it. Now I was curious.

One of the things that the representatives mentioned a lot was the concept of â€œfarm to table.â€ In America, our farm to table is a very difficult concept to actually achieve. A lot of times, the relationships between small farms and slaughterhouses are confusing and expensive. Of course, this is all done with the protection of American citizens in mind, but it really just adds to cost with unnecessary bureaucracy. When you think about a landmass twice the size of California with only 200,000 people, trying to enforce some kind of distributor relationship with slaughterhouses is just silly. Farm to table isnâ€™t a novelty in Australia, itâ€™s just the way food gets to the table.

Iâ€™ve never been to Australia, but one of the quotes that struck me at the lunch was something to the effect of, â€œBefore people come to Australia, they donâ€™t have a high opinion of the food culture there. After they leave, when they are asked again, they rank it number one in food culture.â€ Iâ€™m sure this has something to do with the people administering the study and possibly the participantsâ€™ politeness, but itâ€™s something to think about.

Editor’s Note: This post was sponsored by Tourism Australia and BlogHer

Next post: The Top Six Cheap M-eats in Chicago