I just read this. These guys come up with a great concept and ruin it, so I’m going to help them out. I surveyed some gamers on Fazed and some foodies on Yelp and here’s what we came up with (in no particular order): 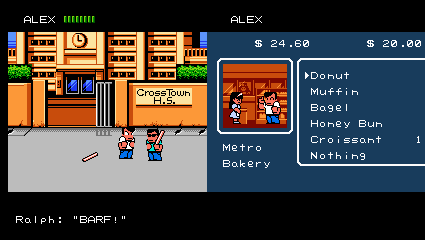 Technically not food, but food plays a huge part of this game. Pick anything else in the game, put it here, and the post has the same effect.

The range of food in River City Ransom extends from burgers to eel and swordfish (and even a vegetarian roll at a sushi shop; the game was released in 1989, way ahead of its foodie time). In each town, there are several different restaurants in which you may purchase food to build your characteristics and get health. It’s the first game to offer such a selection of restaurants and associated dishes. The restaurants are eat-in only, and you pay in dollars and cents.

Toward the end of the game, you go into Hack’s Chicken Shack and smiles are on the menu. Of course, like many a clichÃ© sign has offered, “Smiles are free.” When you order one, the girl smiles at you; you blush. Even though it never increased your health, I think I ordered a smile every time I went in there, usually two – sometimes I went in just for the smile (I think the girl behind the counter liked me). 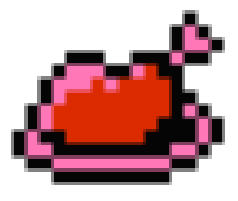 This was the first game I bought with my own money (after I’d saved up enough money to buy the actual video game system). Going through these, it was hard not to pick the old, established video game foods over some of the newer ones. I want someone to look back on this list in five years and say, “yeah, I think that’s right.”

There were a couple of notable exceptions: no-name food in Diner Dash, The meat from Zelda (you didn’t actually eat this), the tons of food in the Romance of the Three Kingdoms series . . . after some careful research, I think we’ve narrowed it down to the winners.

Castlevania’s Pot Roast was one of those power-ups you were absolutely psyched to see when you found it. Of course, you had to smash a brick to find it. How else are you going to make pot roast? 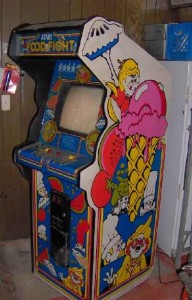 One of the most sought after video game cabinets of all time. Barely anyone reading this has ever played the game because A) Fewer than 100 were produced and B) The game was terrible. Object: to outfox four crazy chefs trying (for whatever reason) to thwart you in your quest to eat a melting ice cream cone.

Now I know a lot of video games don’t make a lot of sense, but anyone in the restaurant industry would be furious at the unreality of this whole scenario. Why are the chefs preventing you from eating this melting ice cream cone? They’re not going to eat it. They couldn’t possibly have a use for the melted ice cream and soggy cone. And they’re throwing food at our protagonist? Surely none of them are restaurant owners. With margins so small, they wouldn’t waste food on some douche trying to eat an ice cream cone, no matter how effective it was as a projectile. They couldn’t even be executive chefs: if the GM found out about this nonsense, they’d surely be fired. They must be line cooks. Even if he was trying to steal the ice cream cone, it wouldn’t be worth the food cost.

Two theories: Maybe the ice cream cone is what’s in the briefcase in Pulp Fiction, or maybe it’s just the principle of the thing. 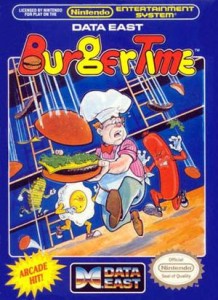 Still the most famous food-based video game of all time. You can play a version of the game online here (kinda sucks, but you’ll get the idea).

When I was growing up, my dad bought this for my brother and I for Valentine’s Day (maybe Kid Icarus would have been more apropos, but you can’t fault him for trying). Tim and I probably played it for two days before it got stale.

As far as the food tie in goes, it’s smack-you-in-the-balls obvious. Leaving this game out is like leaving goatse.cx off a list of X-Rated internet memes. You’re a chef, the object of the game is to build a five-story tall burger while avoiding giant humanoid pickles, fried eggs, and hot dogs. What else do I need to say? 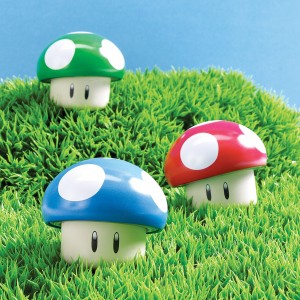 The uber-nerds over at Crispy Gamer must think that the mushroom in SMB is too cliche to include in their list, so they threw in something obscure from Earthbound instead? They’re writing this for their audience, which is, of course, other uber-nerds; still no reason to miss the mushroom. One is poisonous and takes life away, one makes you bigger, one gives you an extra life, one replenishes your health, and you can even put one in the gas tank of your go-kart for a nitro boost . . . the mushroom is the superfood of the video game world and the jabronis over at CrispyGamer completely missed this. 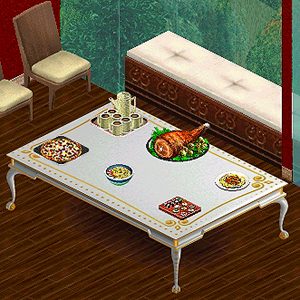 Virtual food that acts like real food. Some people don’t have a taste for certain kinds of it, you can get food poisoning, you have to prepare it, you can order it and have it delivered, friends come over to eat it, you can be good or bad at making it, you have to go to the bathroom afterwards, if you don’t clean the dishes, you get flies, and if you don’t eat right, your health may decline. In the first one, you don’t have a whole lot of selection. There’s even a fansite dedicated to all the types of food in the game.

The most annoying of all video game foods; all the hassle of food prep and cleanup with none of the tasty benefits. 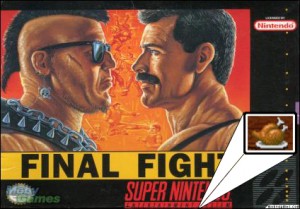 I have to hand it to these guys on this one. I always looked at that perfect roast turkey and wondered where they got the idea to use that as a power up; It always looked so out of place. I could imagine that you could kick apart a trash can and maybe find a drumstick that someone threw out, a half eaten hamburger (actually saw a Mickey D’s burger sitting alone on a bench yesterday – if it was a cheeseburger, I might have grabbed it) but a beautiful, whole roast turkey was just downright anomalous. Actually, just about everything in this list is an anomaly, but the unintentional comedy of this anomaly makes it something that I had to include. Kudos, Crispy Gamer: 8.75% correct. 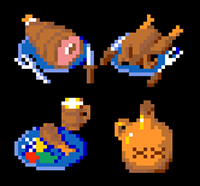 Look at that selection! Ham, Roast Turkey, a chicken dinner with a mug of beer, and a whole jug of moonshine. Enough to make any warrior, elf, wizard or valkyrie full and ready to take on any number of otherworldly beings.

Is there an end to this game? I don’t remember ever beating it or seeing anything like a boss. I first played this game on an island in Casco Bay at a restaurant called The Spar. The family vacationed on these islands; there was nothing to do for most of the day, and every so often, mom would give us some quarters so we could go play Gauntlet. Every time there was food on the screen, my brother and I would fight to get it first and complain that the other wasn’t sharing, especially when the brother who got the food had a stronger health meter. At 100% health, I can remember shooting the food “by accident” on more than one occasion. Tim was understandably pissed.

Maybe that’s why we never beat the game. 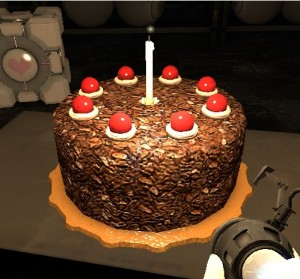 Go ahead fanboy; say it . . . it’s a lie. I get it. Urban Dictionary translates it as “your promised reward is merely a fictitious motivator,” but with all the poetry scrawled on the walls in the game, it’s surely deeper than that.

I can’t decide if this is more like “Sorry, but The Princess is in another castle” or if it’s a metaphor for most first world inhabitants’ unhealthy attachment to physical objects – a slight on the theoretical brass ring. 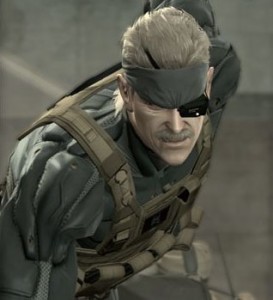 From Foxco: “A ration is the allowance of food for one person for one day as prescribed by military regulations. Rations are designed for group and/or individual feeding and must be nutritionally adequate. The C-Ration (C-combat) was first developed just before World War II and was used as the military’s primary combat ration until 1958. In 1958, the “Meal, Combat, Individual” officially replaced the C-Ration but the old name stuck. Soldiers didn’t complain about having to eat MCIs – they complained about having to eat c-rats.”

Never knew what was inside these things, but I never really cared. Don’t remember him ever smoking after opening one, but with the raspy voice, I wouldn’t put it past him if Snake snuck a cig or two off camera. 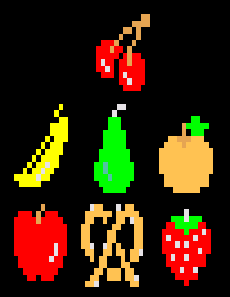 Where’d they get the pretzel from? Was it that hard to get a watermelon to fit into those dimensions?

I was never very good at Pac Man, so my goal was to advance as many levels as I possibly could. As a result of this, I never really cared so much about the bonus food. It just meant a couple of points added onto your score. This choice really gave me a hard time because they played such a nothing role in the game. There might as well have been a “500” bouncing through the maze. However, it is undebatable that Pac-Man’s cherries are the most iconic video game food in the history of gaming. I’d challenge you to find something to fit this moniker if there was a challenge to be had. 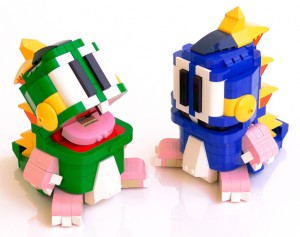 We traded for this game with Sarah Conte who lived all the way up at the end of the street and had a one-eyed Husky named Nick. I don’t remember how long we had the game, but we beat plenty. It was a sad day when we gave it back.

Do kids still trade games these days? I remember in fourth grade, I made a deal with this kid, Seth Eisland. I would do his math homework and he promised to give me a bunch of his video games he was done with at the end of the year. June rolled around and he reneged. I empied his locker and started throwing all his stuff around the room (for some reason the lockers were in the room, it was weird). I never talked to him again. Wonder what he’s doing now . . .