The final word on “foodies” 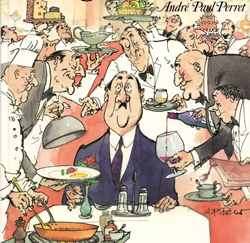 I have been reading all sorts of blog posts that are anti-foodie lately (of course, they’ve been around for quite some time, they’ve just recently been brought to my attention) and I’d like to clarify some things. The posts say that self-proclaimed foodies are snobby, don’t know much about food, enjoy luxury food because it is luxurious (and to the contrapositive DO NOT enjoy plebeian food because it is plebeian), and care more about the name of the chef, star rating, and exclusivity of the seat than the taste of the food. Going one step further, Chowhound officially denounces the group as people without minds of their own:

This is probably more to stroke the egos of the people on the Chowhound message boards than anything else, since they go on to say, “Chowhounds blaze trails,” and “This discerning, passionate crowd has long been completely invisible and utterly disenfranchised” as if every single @%#$ing one of these underdogs that sign up for usernames on this message board is the first one to experience that special moment at each restaurant for the first time everywhere they go. How’s that for holier-than-thou?

No one likes to be a follower, and if you sign up on this CBS-owned site to post your thoughts and respond to other’s posts here, then you’re a pioneer! Buck that food appreciation trend of sharing your feelings somewhere like Yelp, Citysearch, or (God forbid) Zagat; those wonks don’t know REAL food! As a bonus and to prove how unique and individual your taste is, you can sort by “Most Discussed” on our website when looking for “Best Of” anything!

Why would you choose to poo-poo a word at the expense of hypocrisy? Another post on the site again discounts foodies as sheeple, the irony being that it comes from someone so thoroughly taken with his identity in a word that his title at the newsmag is simply Chowhound-at-large. What would that person’s primary job responsibilities be? Despising hype? Not being fooled by flash? To find great food and tell other people about it? OK, so you’re a Chowhound and the rest of the people who read your posts are also Chowhounds; they’re most certainly NOT foodies who only eat where they’re told . . .

Am I missing something here? Jim’s posts on the Chowhound message board lead me to believe the guy is on the right track about bringing people over to the gourmand side, but he’s steering his flock in the wrong direction by seducing them into the attribution of negativity to the word in question. I guess I’ll just have to chalk it up to pride in his website (in deference, he has every right to be proud; I use the site religiously).

And take a look at this post titled, “Foodie: I shall not wear a badge of shame,” by Sarah Gim. She announces that foodie is a derogatory term and goes so far as to say she has an involuntary physical response at being tagged with the moniker. While Sarah claims she doesn’t harbor any snobbism about foods, that fact certainly shows she harbors this very snobbism for vocabulary. Does that make her a writie? She goes on to dabble in a bit of neology and says:

. . . the word to describe someone who absolutely adores food, whatever that adoration entails, without the pretentions of luxury foods and esoteric food knowledge, but a simple love for all things food . . .

. . . foodies are amateurs who simply love food for consumption, study, preparation, and news . . . foodies want to learn everything about food, both the best and the ordinary, and about the science, industry, and personalities surrounding food.

Eifnaj didn’t quite catch fire like Santorum but that’s a post for a different blog (if you don’t get it, you’re probably better off). UrbanDictionary brings the confilct to a whole new level:

A person that spends a keen amount of attention and energy on knowing the ingredients of food, the proper preparation of food, and finds great enjoyment in top-notch ingredients and exemplary preparation.
A foodie is not necessarily a food snob, only enjoying delicacies and/or food items difficult to obtain and/or expensive foods; though, that is a variety of foodie.

A dumbed-down term used by corporate marketing forces to infantilize and increase consumerism in an increasingly simple-minded American magazine reading audience. The addition of the long “e” sound on the end of a common word is used to create the sensation of being part of a group in isolationist urban society, while also feminizing the term to subconsciously foster submission to ever-present market sources.

Though the terms “gastronome” and “epicure” define the same thing, i.e. a person who enjoys food for pleasure, these words are perceived by the modern American consumer as elitist due to their latin root forms and polysyllabic pronunciations.

I think the second writer just likes the sound of his own fingers hitting the keyboard, but it does speak to the apparent dichotomy.

On sites I post to, I sometimes get the sense of latent negativity toward my username. If I’d known this was such a polarizing word in the food community, I would have most certainly eschewed the use of it in my URL. Why would I want to be written off as a know-it-all, snobby foodie if I could have gone with something that so many didn’t detest?

Here’s what I think happened. Someone somewhere met another someone who was an arrogant ass about food and called themselves a foodie. The someone that met the arrogant ass was a super-connector or had a blog and an audience and decided to write or say something about foodies (e.g. Sarah Gim, Jim Leff). The audience, ever so eager to conform with the super-connector that the sentiment bled through the food community and now we have Star-Bellied Sneetch syndrome around the word.

Are the people using the word the snobs, or are the people that would shun someone for using the word the snobs? If you think you’re better than someone else that defines themselves by a certain word, wouldn’t you immediately be classified as a snob? Oh no sir-ee – here’s the Fix-it-up-Chappie with a new word for you to define yourself by; come join my website and become more unique.

Just to put things in perspective, here are a few pro and con posts about foodies:

Looking at some of the dates to the articles, I’m wondering if I’m simply late to the party. Has all the animosity surrounding this word died off? What is a foodie, really? It’s completely vocabul-ist to lump all self-proclaimed foodies into a category with a negative connotation: It’s like saying that if you’re Italian, from New Jersey, and put too much product in your hair, then you must be a douchebag (well, maybe that’s a bad example, but you know what I’m getting at). Are there are a few Dean and Deluca-trotting, 20 year old balsmic buying, truffle-eating tools that are ruining the word for the rest of us? The rest of us being people with slightly refined palates and an interest in the food community as a whole, not just the flavor hitting our tongue.

I like good food. Last week, I had a pastrami sandwich from Katz’s and a margherita from from Motorino (yes, I had both of them for lunch). Wait for it, there’s more. I can see Jim Leff reading that last sentence and saying “SEE!” That’s not the end of the story, it gets worse (and by the way, Schwartz’s in Montreal is still better, and the Motorino dough was too thin in the middle, the toppings didn’t cover the whole pizza, but the ingredients popped with flavor like no other pizza I’ve eaten – for the money, I’m on the fence, but it’s worth another try). I then walked by a place that had a sign that said “Cupcakes from a truck?” and thought they were selling cupcakes FROM The Cupcake Stop. The owner said “No, but these make the cupcake truck’s cupcakes taste like Hostess’.” That may have been true, but I’d just had an entire pizza and a pastrami sandwich, and I wasn’t about to spend $3 and the nonexistent space in my stomach to give some no-name schmuck’s attempt at cupcakes a try; I wanted the brand name. I want to see what the big deal is first, then I’ll come back some time I’m not engorged and give the schmuck-cake a try.

So do I care where the food comes from? @#%$ yes I care where it comes from. After my first taste, am I about to blindly follow consensus or formulate my own opinion? Come on. Do I allow that there are people who go all Emperor’s New Clothes on each successive trendiest-spot-in-town? Absolutely.

The ascription of the negative foodie to someone is an assignment by a food snob. If they’re right, there are two pompous jerks involved in the transaction; if they’re wrong, only one.

I hope that clears things up.