For the month of May, I’ll be setting up “Social Media” for Domand Deli in the Bronx. The issue with this is that Domand’s clientele doesn’t use Yelp, Grubstreet, Eater, Twitter, Facebook, or Foursquare. None of it. It isn’t that kind of place. It’s an old world Italian deli with those same business sensibilities in a changing demographic climate.

The place is in what Google Maps calls the Unionport section of the Bronx. I don’t know what this means, but Frankie says it used to be 50% Italian, now it’s 8%. I can understand why he’s the only deli around these days. The area is far more demographically diverse, and this doesn’t necessarily bode well for business, but he still has his locals, and they’re still true to his products.

So how do you get people excited about sandwiches, anyway?

For starters, you have to build on your strengths. Take a look at this picture. One thing that you’ll notice is that the names of the sandwiches are names (and aside from the “Domand Special,” nicknames) of patrons of the restaurant. He’s got his regulars and they’ve got their own sandwiches. Below is my proposal: 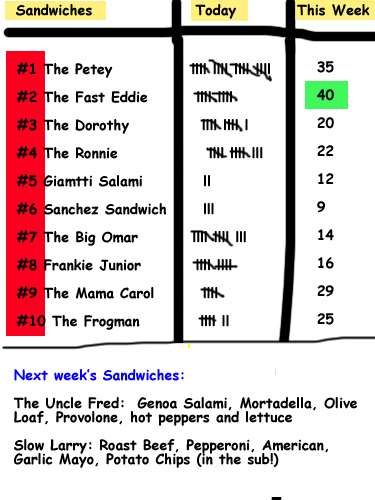 This is going to go up on a white board behind the counter during the lunch rush and will be in the window at all other times. We’re making the purchase of subs at Domand a social game. The top subs stay on the list each week, the least popular subs get kicked off the list and replaced by newcomers. Each of the subs is attached to the name of one of the regulars and new submissions are only offered to regulars (we could do a loyalty card here, but Frankie thought that might be too much – he said he knows who the regulars are). About picking the regulars, there are MTA guys working on the tracks near his store right now; I gave him the idea that he might want to pick one of the popular guys in that group to have a sub named after him, even if he’d only come in a few times, just to branch out.

Three things got me interested in naming things after others to influence sales:

1. In “How to Win Friends and Influence People,” Andrew Carnegie offers to name a business after a rival. Go here and search for “Pullman.”
2. The quote: “There’s no limit to what a man can achieve, if he doesn’t care who gets the credit.” – Laing Burns, Jr
3. Zach Brooks of midtown lunch going nuts about Ma Peche in this post

To tell you the truth, I thought the Banh Mi at Ma Peche was a rip off, but he really liked it when I talked to him about it. Regardless, Chang’s approval made him the most excited he’d ever been.

This is the first step in the marketing overhaul of Domand Deli; Frankie is tracking year over year numbers in June, and I’ve claimed this would lead to a 10% increase in sandwich sales (I think it could be more than that, but I wanted to stay conservative).

Full Disclosure: I work in a pro-bono for Domand Deli. The owner, Frankie, is a college friend’s father-in-law.