I came here on the way back from looking at apartments in Williamsburg (not happening!) and needed something before I got in line for the Lost Finale at Professor Thom’s. I’d always heard about this place as awesome. Ridiculous. “Did you get the Artichoke slice??” No, I didn’t. I felt like I was missing out. Everyone talks about pizza in NYC, and when you hear about slices on the island, this is always one of the names that comes up. I got off the train at first ave, saw the sign, and entered food blog mode.

There was a line about three people deep. I took the top picture at the height of the line, and took some more shots because you can only have so many pictures of pizza.

They use a conventional oven here. Strike one. Here’s the obligatory upskirt. Since you only get one thing here, it’s useless to review anything else. What are you going to get when you go to Katz’s? The Pastrami Sandwich. What do you get at Artichoke? You get the spinach and artichoke slice.

Three reasons why no one calls it Artichoke Basille’s:

Peering through the pane glass, this guy looked tasty. It looked tastier going in than it did coming out, though. The artichokes that were standing up strong on the pizza before kinda laid down and mixed themselves into the dip covering the pizza. I say dip because that’s what it is: spinach-artichoke dip on a pizza. I’m going to call this strike two. They have the opportunity to innovate here and don’t. If you like spinach-artichoke dip, you’re in luck – you’ll probably be happy with this pizza. If you love awesome food, come to NYC, and someone says “You’ve gotta try the Artichoke Slice!” and you get psyched up for it, you’re going to be shortchanged on your big apple pizza experience.

Critics go places three or four times a week to judge quality and consistency. I go to a place once because I’m on a budget and there are eleventy bajillion restaurants in the city. Either this is how it always is or it’s an anomaly: Not only this, but here wasn’t enough cheese on the pizza to keep the dip from sliding around and off the pizza, and the crust was a bit stiff. I was there on an early afternoon on Sunday, so I could blame the hangover crew, but you figure, if you order something that makes one thing and one thing only, you better do it right.

I wasn’t feeling Artichoke and I don’t recommend you bother with it if you’re in NYC. If you’re not in NYC, and you’d like to recreate this, here’s the recipe: 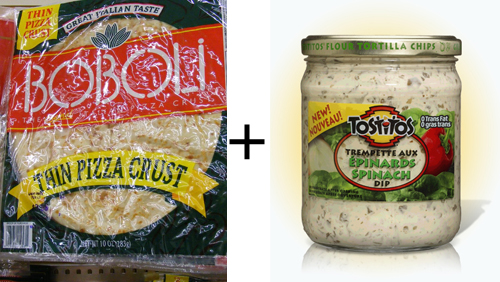